Being a trained Gunsmith, rule #1 is before you can fix any thing, you need to know exactly how it was designed to work and why it failed. That's why I have tried to explain this repair to the extent that you need not piece together bits of info from a variety of sources as I had to to learn what must be done and why.
This repair does not involve dropping the entire dash. You first need to expose the problem that usually results in no heat blowing out of the vents. The basic disassembly starts with pulling the head light switch knob and then pop out the small panel under it. Remove the 2 7mm screws under that. Remove the 2 Philips head screws above the instrument cluster. Now carefully wiggle the entire panel free. Un plug the headlight plugs and that should be it for that one. Then pop up the message center by prying it up gently. To free it, unplug the 2 plugs front and to the left. The white hose and small 2 wire connector to its left unclip as a unit from the panel cluster. Then remove the digital panel in the center by removing the 4 7mm screws holding it in place. I had to snap off the plastic edge in the bottom right so I could free up the digital panel. Just lay the panel off to the left on its side no need to unplug it. This will expose the broken black motor arm. Next you will need to remove the glove box in its entirety. That is pretty straight forward by first removing the inside screws of the black velvet inner box, then the hinge screws.
This is the white motor shaft that regulates the position of the blend door (grey arm) down to the left of the glove box opening. (It can be pulled out some what as pictured) The white shaft is a round type shaft with 2 flats opposite one another. When a flat is visible at the 12 O'clock position, the motor is calling for full heat from the blend door. When the controller is in AC position, the shaft will turn clock wise by 1/4 turn putting the shaft's flats vertical in the 9 and 3 O'clock position.
The picture depicts the shaft in a full heat position (flat facing up) with the broken arm in a full AC position. 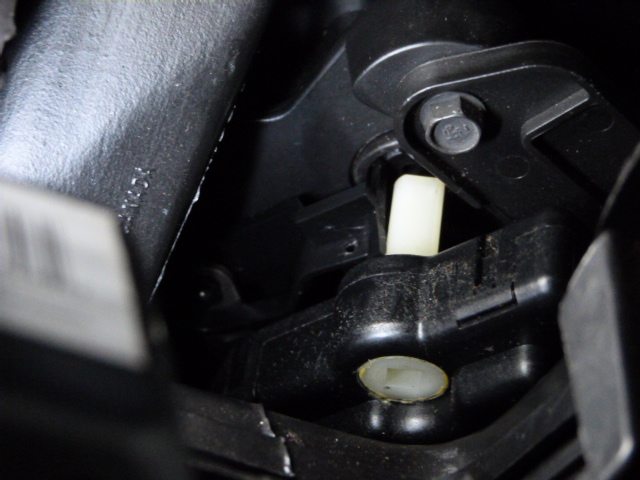 You will notice a small hole drilled in the black arm. That 1/16th hole is part of the repair process. The broken top piece can be pulled out with a pair of long needle nose plyers. 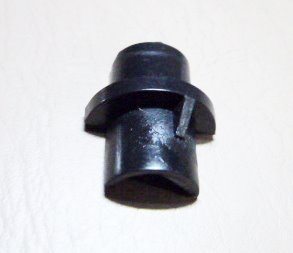 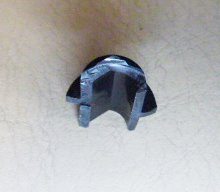 Part of the repair requires the broken part to get a pair of grooves ground into its top rib like this; 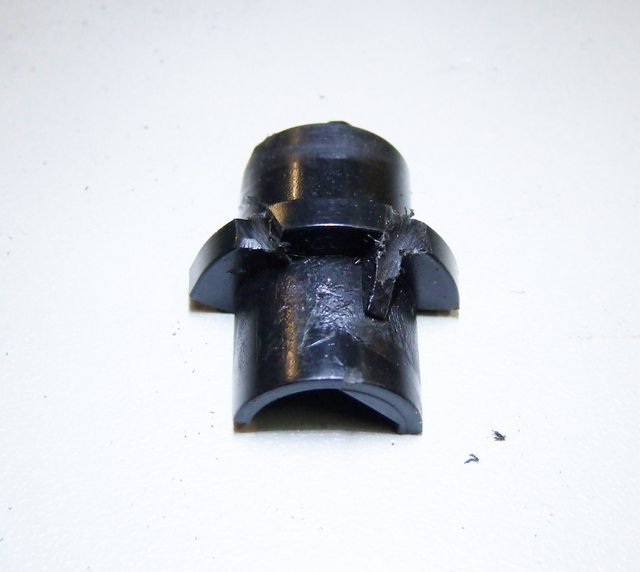 In order to drill the 1/16th hole in the arm as shown, you will need to cut a 16" dowel and wedge the grey blend door arm up to its highest point as pictured. This will hold the upper black arm firm so you can drill it with an off set drill attachment. 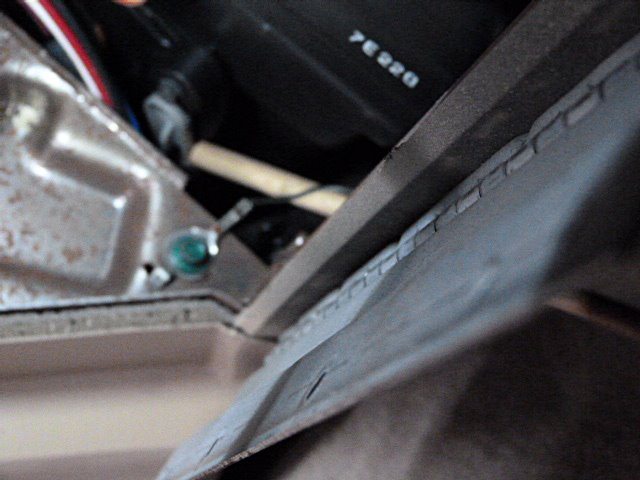 What I see as the best permanent solution is wiring the broken half firmly onto the broken arm. This requires a good 14" length of soft .042 or similar wire. The wrap style would start by first going in over the shaft and out threw the drilled hole, leaving a 3 or 4 inch tail sticking out of the arm. Then use the opposite length to down around once and cross over the top ground cut, then one loop all the way around, cross back over the top to twist tie with the forward tail there as shown here. 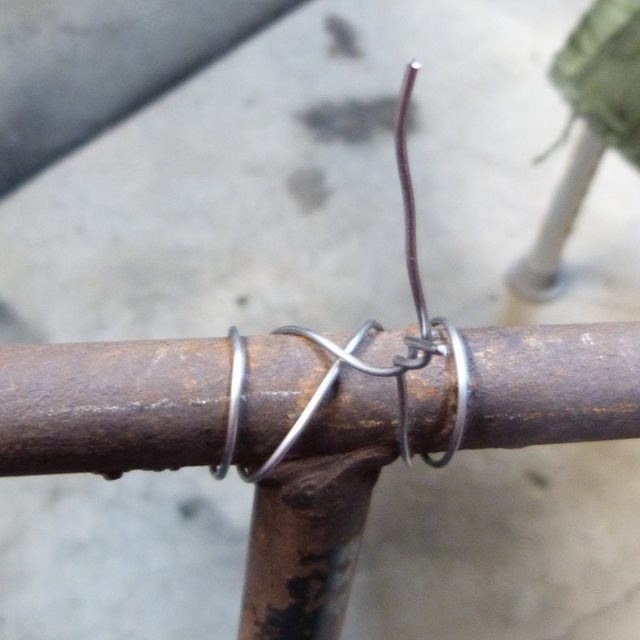 *** BEFORE attempting to wrap the wire, be sure the white motor shaft is in full AC position. This is the shaft with its 2 flats in vertical position on the left and right of the shaft. Also, remove the screw above the shaft so you can fish your wire in behind that plastic plate above the shaft. Also, to ensure the broken piece mates with the broken arm around the shaft, you will need to disconnect the connecting rod at the bottom end. It connects there to the grey arm. Do this by simply prying off a lock ring washer that holds the arm onto the grey arm at the bottom. Once you do this, the black arm will easily turn into its natural seat under the white shaft. Once you get the wire all wrapped around using needle nose plyers, twisting the ends will draw the broken halves nicely together. Wrapped properly, there should be no wiggle of the arm on the shaft. it should be solid with the shaft. 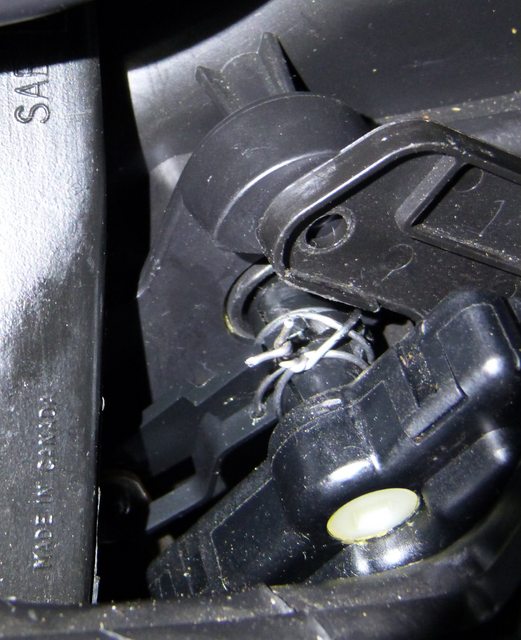 At this point, I decided to go with stabilizing the wires in place at their twist and surroundings with some JB weld. Just be sure not to get the front or rear of the black cylinder because they still need to get pushed back into the motor housing and the base hole in the back of the shaft end. 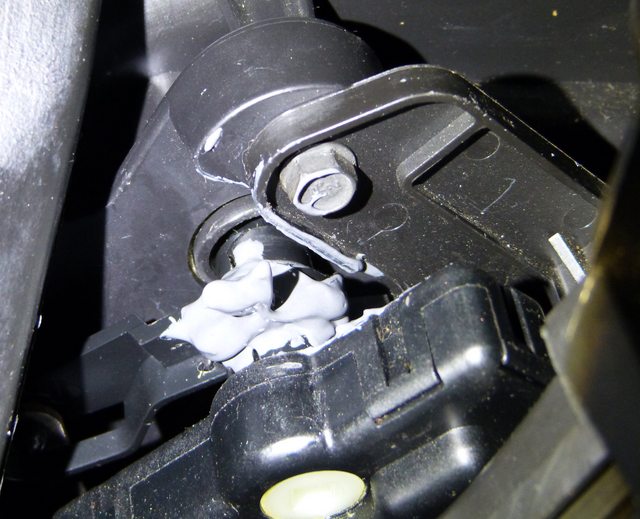 At this point, its time to fix Fords screw up! The reason the black arm has broken on all of these cars is the fact that when the blend door (grey arm) gets to its fully closed position for hot air, the motor has yet to come to its stop cycle, forcing the connecting arm still further at the stopped grey arm resulting in the weaker black arm's breakage. To remove the connecting arm that goes from the black arm to the grey blend door arm, have the motor shaft set to AC position. With a long small screw driver, simply push/pry the arm off its pivot nub on the black arm until it slips off the nub and let it fall down. The black retaining finger that keeps it in place is pretty flexible and it will give enough (bend) so the arm can slip off the nub. Please note that to re install the arm once its modified, push it up from the bottom from behind the grey arm and be ready with a long wire hook to capture the rod arm at the top. The angle of the connecting rod must go in at that angle or else it will be blocked from being hooked back on to the grey arm.
I have carefully measured the connecting arm's movement and came up with these specs that need to be machined into the arm. I used a small bench top miller to achieve the exact cut required. Also notice the slight flattened rib to the left of the hole. That is a needed mod to the arm also. 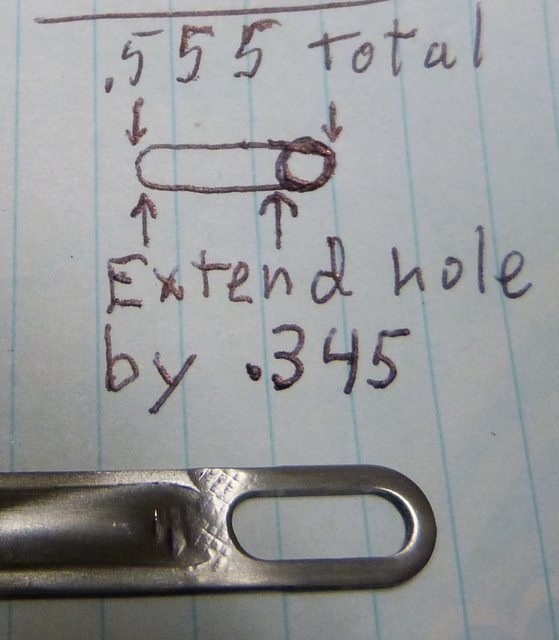 The lengthening of this hole has been mentioned in some old posts as a permanent fix but no specs. The other thing that was never mentioned is this lengthened hole puts a flaw in the controller's ability to provide a consistent temperature flow of air at times since the grey arm will be at the mercy of the air flopping it around in the slot of the arm hole. To counter this floating blend door effect, I have designed a mod that uses a spring loaded washer as a friction brake to the grey door's movement on the elongated arm hole. In this picture, imagine the crescent wrench as the grey door arm and the gold pin as the nub that the connecting arm fits over. The Connecting arm will ride between the 2 washers. 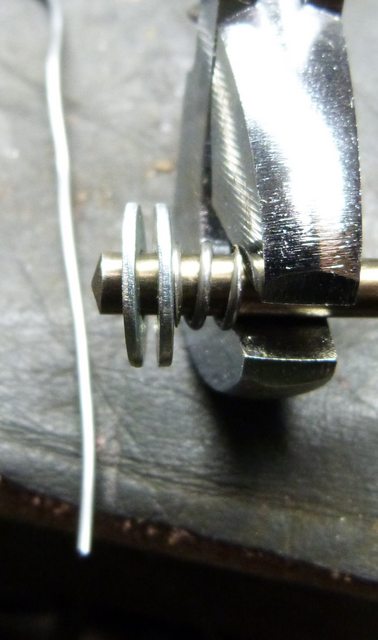 The entire brake consisting of the 2 washers, connecting arm and spring will have a working distance of .240" up to a retaining hole drilled at the tip of the pivot nub. The hole is drilled with a .046" drill so a length of the same .042 wire can be used as earlier in the repair. The washers are .035 thick. The rod arm is .062 thick and the spring wire is .035 thick with not quite 3 coils. The nub OD is .182" so the washers and spring must slide over that diameter smoothly. So basically, with everything on the nub, it must compress to slightly less than .240" providing the retaining hole is placed as pictured. 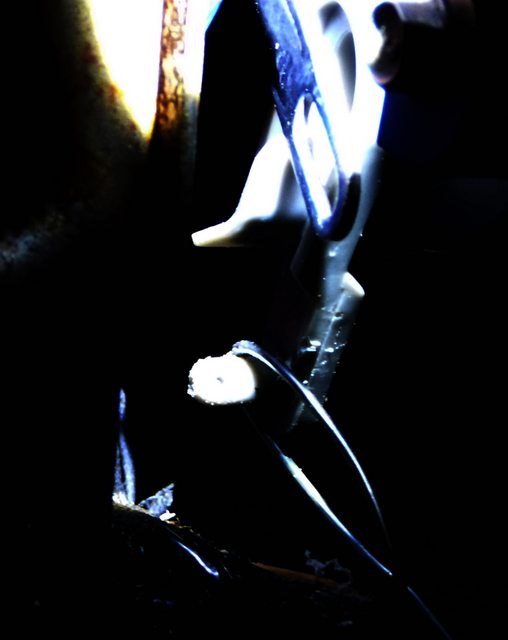 To drill the hole, you can see a wire I used to anchor the arm toward the glove box hinge hole so I could drill the hole with it being firmly in place. Placing a 1/4" thick nut on the nub before drilling will ensure you do not short your self on nub space for the assembly. I used a Fordom cabled hand drill to get in there to drill the hole but something like a dremil may also fit well enough to get the hole drilled relatively straight across.
With everything in place and retained, here it is in full hot air position with the wire twist retainer. Notice the oblong hole exposed while the blend door is completely bottomed out. 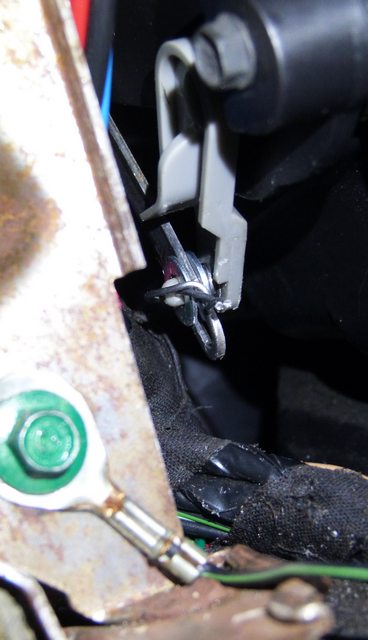 There is one other avenue of correcting the floating door issue that may be a simpler fix than the pictured friction washers. That is to locate an expansion spring and simply attach it to the grey arm and string it out to below a black screwed in bushing type of plastic that is to the right of the arm. Once I locate a proper spring, I will add that mod to this post. To repair this problem in this manner, I will be the first to tell you.... Its not easy! But if you want perfection, AND are very handy, this is the best permanent fix that can possibly be done.

As an update to this post, I found an easier way to keep the vent door from drifting in the mid way settings of the modified rod hole. The spring I used was found at Lowes as pictured. The spring starts out like that one on the left. 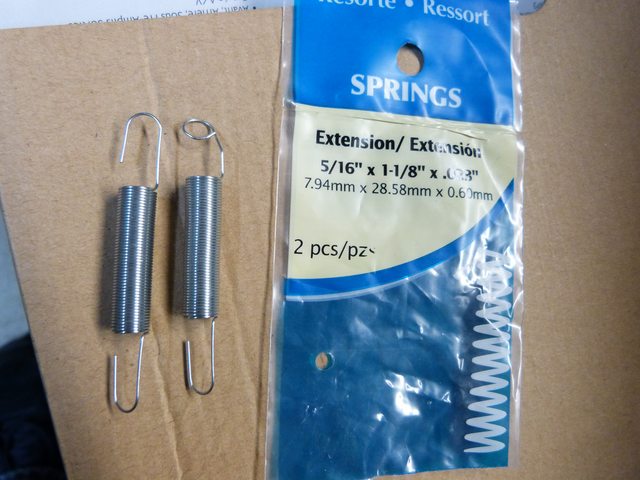 The spring needs to be cut down to a total of about 29 coils and bend the loops into it as the finished one shown at the bottom with the cut off section at the top to be discarded. 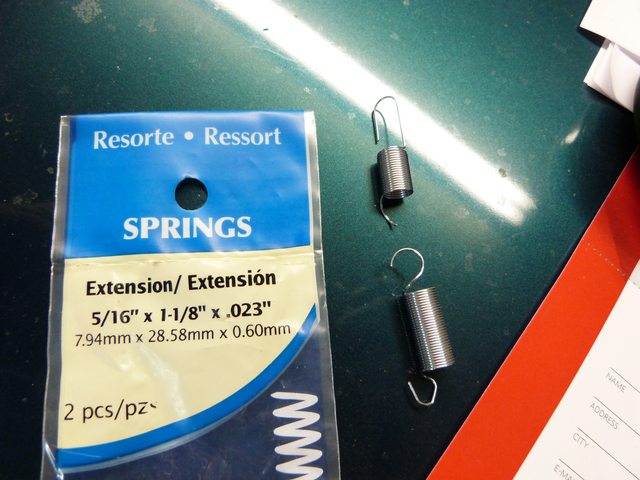 Here is the spring attached with the car in full heat position. 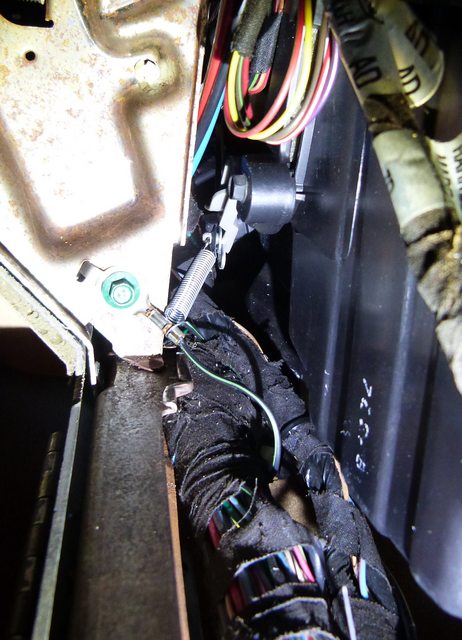 And here in the full AC position. 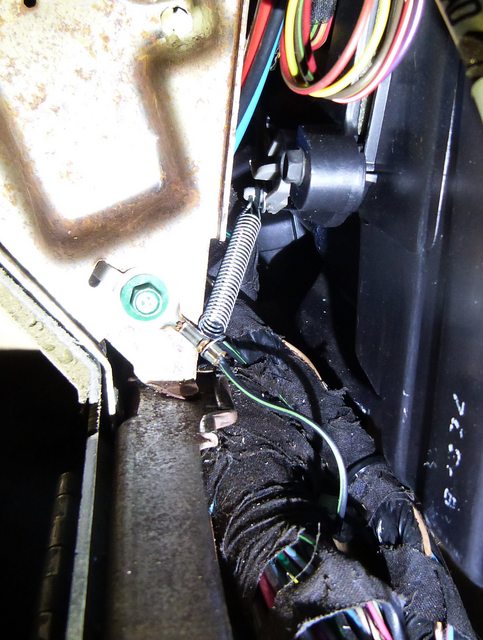 Good thing the Ford engineers put that ground wire there! A perfect perch for the spring
This is an awesome mod! Works great and easy to follow. This was the third blend door replacement and looks like the last! Thank you!!
Attention!!! I have updated this How To with a part 2 that makes repairing the Black plastic Arm obsolete. Its a must read before you do any work on your "NO HEAT" issue. Its near the top of these How To repairs.