My 97 had a bad right rear 5x7 JBL so it was time for replacing all of them. I have the premium JBL syatem in the car that includes the upper door tweeters. I wasnt looking for a big up grade, just decent modern replacements that I found in HarmonyAudio.com . I replaced the 4 factory 5x7's with the HA-C68's and the 2 door tweeters with a pair of HA-C35's as suggested at the web page. The 5x7's are drop in and were pretty easy to convert to using the factory wire connector. I sniped the wires off on the old speaker connectors and un clipped them from the speaker frame. Then snip off the plastic frame guides under the connector for clearance on the new speaker as you just solder it in place. The polarity of the connector box will match the polarity of the Harmony speaker just as pictured. 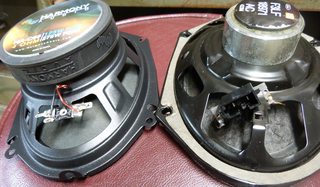 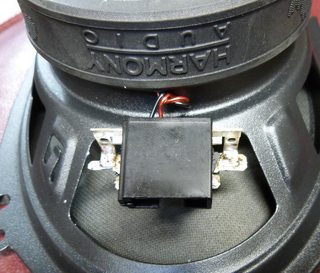 On the 5x7's in case you need to know the polarity, the right front and right rear 5x7's match wire colors and are BK/LG is Poss while the Bn/Pk is Neg. The left side 5x7's are PK/LB =Neg while LG/W is Pos.
The right tweeter uses a jumper to the speaker from the car's harness that can be re-clipped to the new tweeter speaker. The neg is the black wire coming off the W/LG while the pos is the green wire coming off the DG/O harness.
The left tweeter's green coming off LB/W is Neg while the Black is Pos is coming off O/LG.
Its imperative you get the polarities correct with any kind of power. I use the factory amp and am happy with it.
The small 3.5" C-35 speakers were a bit of a PITA to get situated but it worked out OK. The first thing I did was band saw the back off the plastic shell they are enclosed in.

Then use a needle nose plyer to grab their screw heads and turn out the OEM screws that hold them in the box. Then use a drum sander to open up the speaker hole by about 1/4" just enough to pass the bigger speaker magnet threw the hole. Then drill a pair of holes to match the new speaker mount holes in the plastic, screw & nut them in place. The bigger magnets will fit into the doors with a foam covering on the passenger side but not on the drivers side. In the back I just left the OEM tweeters in place since changing them out would mean removing the wall panels. The rear grills pop off at the bottom first then pull the grill down and out. The foam inside the grill will be dust so you need a material to deaden any vibration on the grill. I just put 3m dbl sided emblem tap on the speaker grill base as pictured, sticking the grill to its inner base. 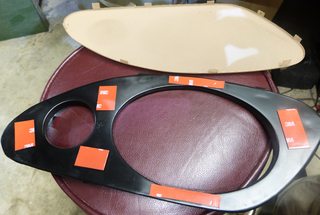 Tweeters dont normally go bad in basic systems like these so I dont see a problem leaving the factory paper JBL tweeters in place since it's an entirely different level of tare down to do the tweeters than just the drop in 5x7's. Have Fun!