This can be a real head scratcher if you don't do a bunch of searching and even then the You Tube vid on this off model repair misses some points.
The symptom I had was the drivers side power lock was a hit and miss situation. Sometimes the door lock would respond properly and other times it would just make weird grinding hum noise. I went to Rock Auto, and got a pair of new actuators for $14 bucks a piece and don't forget the 5% off coupon. For the 14 bucks, I got to say, this china made actuator thumps the lock with good authority. No issue there.
These actuators are held in place with one big rivet. It is located below the door latching assembly as a large black humped washer about 1" in diameter. Start out by having the window rolled up, door panel removed and latch area sound paper pulled back. Take a 1/8th inch punch and beat the rivet stem that's in the center of the black washer loose and into the hollow of the door. Next you need to remove the near by window channel bolt that is on a large black washer. Its a 8 or 7 mm nut size. Also unplug the round grey connector that's near that same bolt head. This will allow you to pull the window channel down slightly and free it inside the door. With it out of the way, you will be able to pivot the actuator past the channel bracket. But first you have to free the actuator by drilling out the black washer with a 3/8ths drill or similar size. Once you have the rivet head drilled off, you can tap the remainder of the rivet into the door making the actuator loose in the door. Now you need to take out the 3 door latch torx screws. With the latch loose inside the door, turn the latch and get the actuator positioned up to the right so its operating rod is in the window enough that you can get a bolt cutter on the rod and cut it off the actuator. Now you pull the plug off the bottom of the actuator and remove it. Lift out the cut piece of rod from its bushing in the latching assembly. The picture shows the drilled out black rivet washer and how its mounted to the saddle bracket that holds the Actuator to the door. 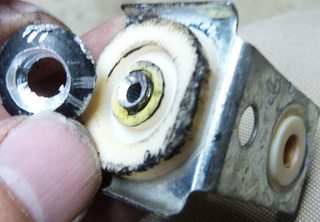 Pull out what remains of the rivet in the bracket 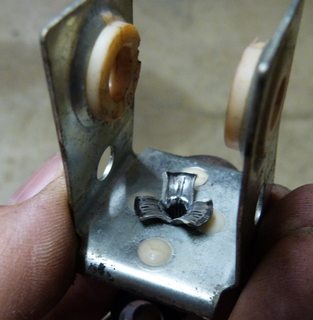 I opted to mig weld the head of a 1/4" x 20 bolt to the bracket so it would be a snap to bolt it back in with having to hold the head in place while tightening the out side nut. That would have been an impossible task without the welded fast bolt head.
Now its a simple job of matching the correct length operating rod to your new actuator *** but don't clip it into the plastic head on the actuator until you have the rod put into its latch bushing first. Then it just a reassembly situation. Just one note of caution. Make sure you get the window channel back in place properly by having its top positioning tab in its slot up in the door. If its in place, the bolt hole will line up nicely and it will have glass into its very top most channel section. Its hard to see the top where it mounts in so its a feel for firm hook up kind of thing. Hope this is a help. 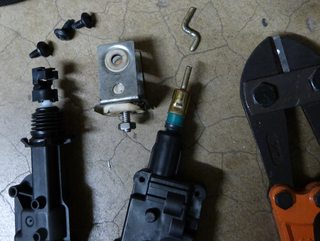