Finaly got this project finished! All from a creeper no less.... Well I have to agree with Capt Fast since he said if to do again, do the 2.25" rather than the 2.5" system. As I have found out, the 2.5's are just not going to fit tight up along the gas tank. On top of the fact that you really should put some form of heat shield between those big pipes and the tank as I did. Just no way to get 2.5's high & tight like OEM under these cars IMO. I sourced about everything off Ebay as I have pointed out. The straight threw X muffler was also an Ebay item that ran 60 bucks shipped. Its a Full Boar MF2468 perf core with steel brilow type packing. Very nice HD quality. My main gripe with the True Benz is the rear main pipes were not bent correctly to evenly pass by the differential. IF I didn't put in those rear extensions, the pipes would have hit the A arm mount and the other would have been nearly on the differential. They needed about another 2" off set to pass by the A arm mounts equally. I opted to put ball & socket flanges at the head of the X muffler so either down pipe can be removed with out dropping the system off the car. This makes changing out the right bank up stream O2 sensor a snap since the cat needs to come out as one piece. The pics show the work. 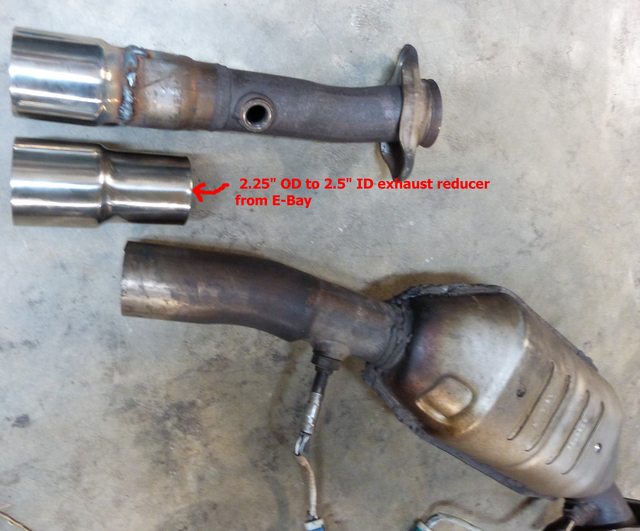 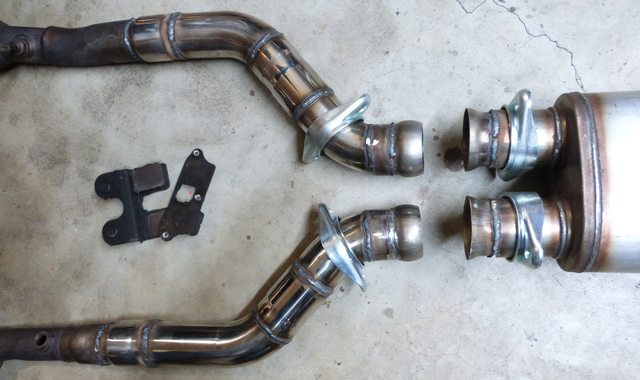 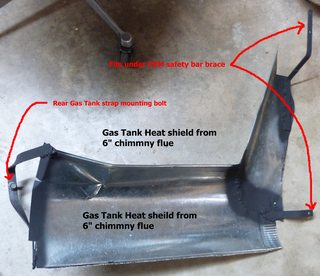 Aparently if your down pipe to trans mount has not yet separated..... it will. Mine was gone with only 75K on the car. So, I devised a new fully adjustable mount to take its place. Mainly since my X muffler is on the heavy side so it will help to keep some weight flex off the manifold bolts. I used hard rubber hanger mounts from Auto Zone as pictured. I made some bushings for the 7/16ths bolts that will go in the existing mount holes. After I ground off the 3 rivets off the old mount plate. 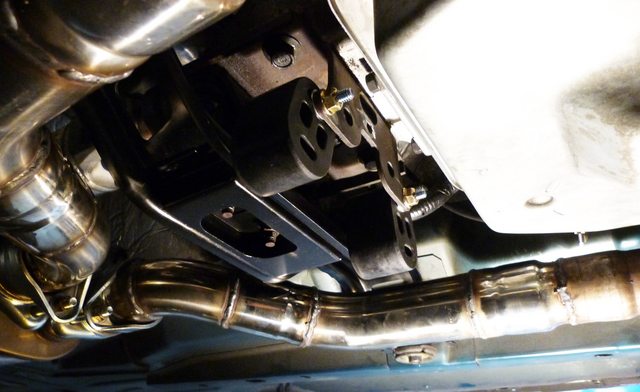 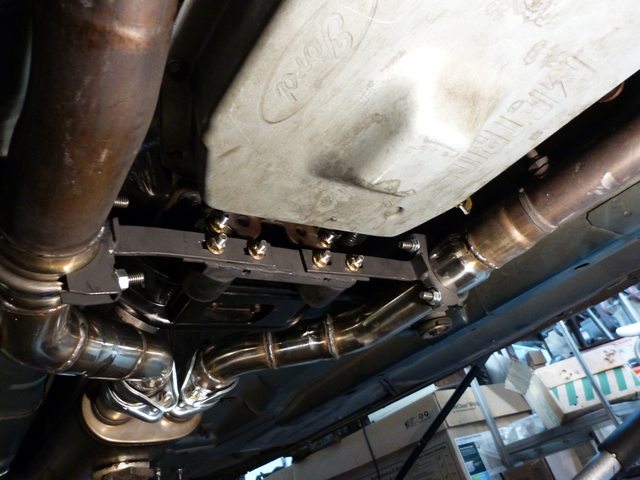 I had originally put a pair of 12" straight threw perf core mufflers on the tails with glass packing. Bad idea..... 50-60 mph drone is off the scale! So I ordered a pair of Flowmaster 50 series Delta flow #942550. These are chambered mufflers designed to minimize drone. Once I get them mounted, I'll post what I think of them. By the way, the car clearly seems to be a bit more responsive with this open system.

***I put the Flowmaster 50's on and it made a big difference in cancelling out the nasty droning. The car sounds pretty good. There still is a low growl at slow cruising speed that I could live with for the most part since running 70-80mph it quiets down to only about 25 percent of the slow speed exhaust note. But I ordered some 3/8ths sound matt just to cancel it out virtually all to gether. For music's sake, I like the snappy performance of this set up but IMO, quiet cruzin is golden. I thought I would expand on the do's & don'ts and one major one is I welded the twin pipes together under the tank area and that's fine but I should have tacked them once in position under the car while still loose in the X muffler. Reason being, in this shot, the left side pipe ends up lower than the right side because its so off center under the tank, you have to cock it downward to get clearance under the tank. I may have been able to jimmy it up closer to match the right side if I didn't pre weld it flat and even with the Xpipe muffler. "if" it was a 2.25 system, this would not have been as much of an issue but still a good idea to tac the main pipes to the X muffler after the X muffler is solid with the front pipes and the mains positioned up tight in the rear.

In this shot, I compare the 50 to the glass pack I had on earlier. The chrome end cap I got off E bay and welded it on. I used the original muffler (uncut on top) straps to secure the 50 to the car's now bent around body hanger. I had to cut about 2.5 inches off the end of the strap then reform it to its original 90 bend and drill it for the clamping bolt and bend it around to match the oval 50 as pictured. The hangar rods were all oxy/acet torch bent around to the proper positioning for the OEM/universal rubber hangers. 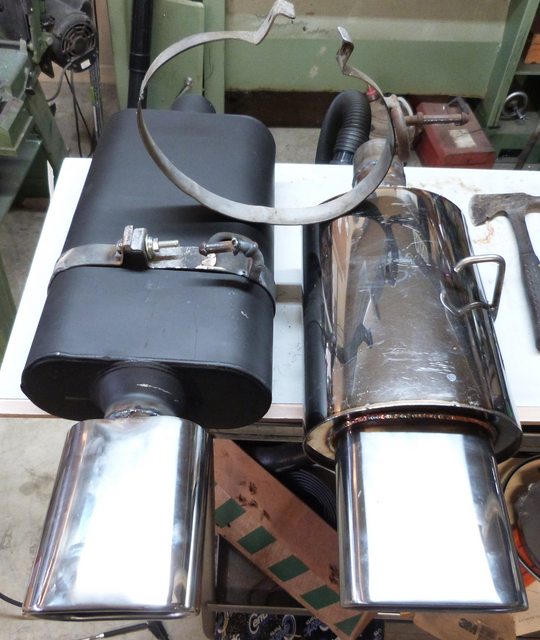 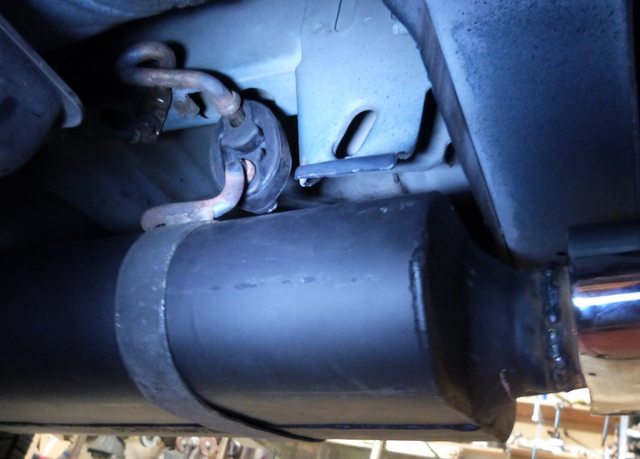 In the comment below, you can see I cocked the oval 50's slightly so half of the left side of the muffler is behind the fenders bottom edge. I hope this gives you all a big heads up on exactly what it entails to do a custom dual install.

I couldn't get the last pic to fit so I put it here. 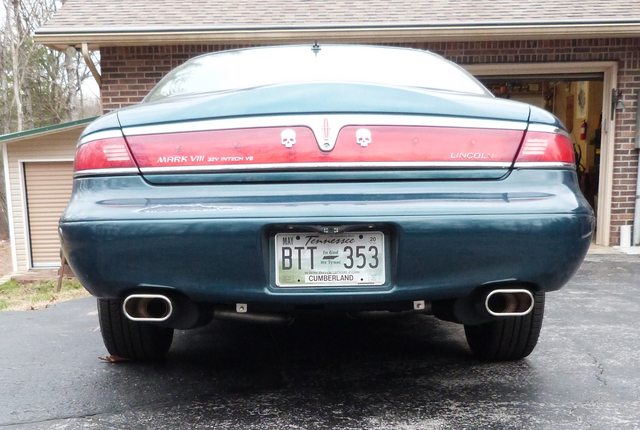 One last thing on this particular system. I posted another how to on modifying your intake into a cold air intake with dual intake ports. The car had its stock single exhaust at that time and had a great velvety vacuum sound under the hood with any kind of throttle after that mod. Then After this dual exhaust mod, I lost the intake sound to exhaust note entirely. The Flowmaster 50's still had some low speed drone that I wanted to reduce so I insulated the truck with 3/8ths thick sound matt foam insulation. I did every panel expect the rear deck, Even the trunk lid. All that work did like 10 percent off the drone so I pulled the rear seat out and that lets you get the rear deck carpet board to slide forward & out. I stuck the foam sound matt to the bottom side of the carpeted deck, put 3 venting slots in the foam and fit it back over the OEM insulation matt. This added maybe another 8 or 10 percent of drone dampening to the car. The most welcome result was now when I get on it a bit, I can make out some of the intake vacuuming sound. I'd say its about a 30/70 split in vacuum and exhaust note. Its very enticing to get into the throttle a bit here and there, yet only ever so slight an exhaust note up at 75-80 cruising speed. 60mph still has a drone that needs more music volume to sort of cover it up. It took 3 of these rolls to do the entire trunk and deck lid but I'm happy with the results. I noticed that dropping out of 4th to 3rd at 60 took most of the drone out at 60 but with more under the hood engine noise. So, the lower geared cars may not suffer from as much mid speed drone as my base car with .302's. Now its only lacking a chip to optimize the intake & exhaust mods. 160"x 39" Sound Deadener Heat Insulation Barrier Thermal Mat Adhesive Foil Layer | eBay
looks great! I'll let you know how the 2.25" works out later this year. Although I have drone, it's not so bad as the years of props, engines and gunfire have inured me to it.
The dual mod has increased the mileage by 1.5 mpg. That's 21.4 stop & go around town and 24.9 Interstate cruising 75-80 mph steady. All on 87 octane. More mods to come.
9/25/20 Update.
Well folks, the droning got to me. I got tired of having most of my radio base disappear with the droning coming on & off at low to mid speeds. So, I pulled out the full boar X muffler that is pictured up front and put in a Flowmaster 50 HD Flowmaster 8525554 Flowmaster 50 Series HD Chambered Muffler
This muffler is a bit too wide to fit flush up under the car but only hangs about 2" down which is fine since the 2.5" SS true benz pipes don't really fit up under the car well anyway. The result of this muffler with the these 2 Flowmasters Flowmaster 942550 Flowmaster 50 Series Delta Flow Chambered Muffler
in the tail made a big difference in finally reducing the drone to a level where its not downing out my stereo base tone that runs threw the stock 240 watt amp. There a lot of muffler choices out there and this one is finally worth a recommendation for power and relatively good comfort that's not much louder than a stock unit with just cruising petal.