**** UPDATE***
Well folks the earlier Ultimate blender repair article on making the repair & mod of the black broken arm is nearly all but worthless. My above repair lasted a little over a year and the stud on the black arm has snapped off like what you see here on this disintegrated junk yard black blend door arm. The REAL fix is a newly produced china motor that comes with the new white arm pictured. All tho its still imperative the metal connecting arm between the 2 blend door arms be modified with lengthening the hole that works the lower AC blend door as described in the earlier BLEND DOOR Repair article. 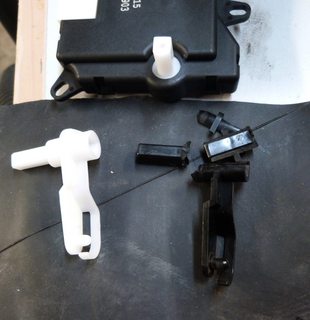 Unfortunatly, you MUST pull the dash board loose by a few inches but is not as bad a repair as I thought. There are a number of motors on Ebay but this is the one I bought A-Premium 1x Heater Blend Door Actuator for Lincoln Mark VIII 1997-1998 604-915 | eBay
The white arm fits a bit tight onto the OEM motor stud so I just shaved a little off the motor stud with a pocket knife until the white arm slid over the motor stud easy. I took the China motor apart and compared the internals to the OEM Ford unit. The China unit uses a vinyl worm gear to run the gear set rather than a brass one as used in the OEM. If you decide to use the China motor, I think it imperative to do the hole mod to the connecting arm or the vinyl worm gear is sure to fail with the binding stress placed on the door arms (fords brain fart) I opted to use my OEM motor. These are the directions I used to get the dash pulled back enough to get the motor off.
Blend Door Actuator Removal and Installation
I have to say tho, its a lot easier to only take the motor off and not the 5 screw plate it sits on as suggested in the article. To do that, you only need to cut or grind off the plastic tip off the barrel nut that holds the motor on at the bottom left. 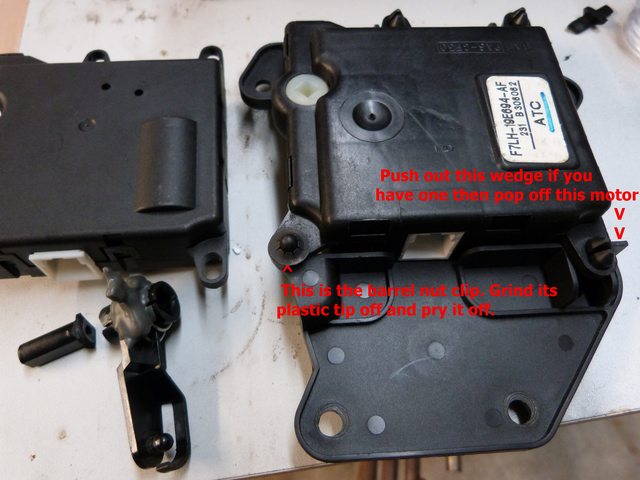 Then once that barrel nut clip is popped off, just pop the motor off its prong studs. It about falls off. No need to put that barrel nut back on. I just put 1/2" thick 2" wide sticky foam on the motor's back and with the dash put back into place, that holds the motor snug in place on its original mounting plate.
Also those instructions totally forgot to tell you about 2 small gold bolt & wide washers that are at the bottom of the dash where the console starts from under the dash. These are the last 2 screws to come out to allow the dash to move back. The one on the right is a huge PITA to get out (45 min.). Its a 8mm and you can only do an eighth turn at a time on it with barely getting your finger tip on it. 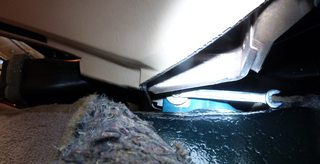 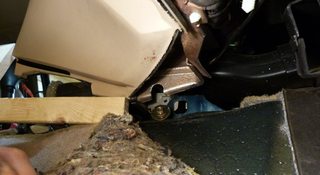 The one on the other side (Left) is easy. Take that out first and once you break the right side one loose, lift the dash up and wedge a stick under the console dash edge. This gives you a little more room to get your finger in at the nut head. Just don't have your finger at the bolt head when you get the right side bolt to break loose or the dash may pinch your finger. The dash will drop slightly when that bolt lets go of it leaving virtually no space to get at the small bolt head. Once you get that little prick out, I marked and drilled a hole in the frame that covers it and then air grindered the bottom edge of the hole open for easy socket use over it.
With a new white blend door arm in place, this SHOULD BE the end of air box air regulation problems! My hats off to the China parts suppliers that put forth this key part. The NEW White upper blend door motor arm!

Is this 97-98 specific or can it be applied to 93-96.. my 96 blend door is making noise.
Sorry, I cant say. I'v not had a Gen 1 apart.
Hers a pic of the sticky foam that I used to keep slight pressure on the motor with the dash back in place. This eliminates the need for the barrel nut. 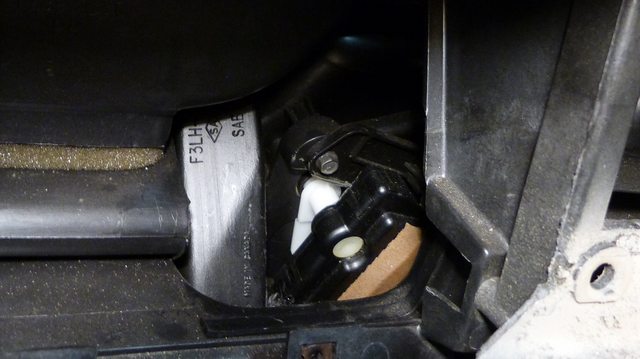 I swapped mine out almost 2 years ago. I gluded a finishing nail in the center of the post that generally breaks......Saying this it will now break