Im just gunna use it for interior details and/or depending on the cost of that other non-detail related maintenance services.

Watch your nav screen if you have one. Whatever money you would have spent on all that maintenance, spend it on detailing stuff.

Im not to worried about it. I was mostly cracking wise since it was something I requested from her.


We still have to get up with the rest of her family that couldn't make it yesterday and mine as well and I always just say give me gift cards.

Made a pre-soak type thing last night when I was bored. Take a look here...
http://www.detailingbliss.com/forum/f34/green-goop-creation-7100.html

WTF? Unstickied? Looks like I'll be bumping this thread to the top every 20 minutes...

I filled two up with FK425 (100% and 50% dilution) and I decided to get a little weird on the third one. The bottles are 16.9oz size, so I filled it with about 10-12oz of water. I was originally going to dilute FK425 to about 25% for clay lube, but I figured since it was my last bottle I'd try something goofy, considering I don't have any product like this. I wanted to go with a dwelling pre-wash approach, aimed specifically at the rear fenders considering they accumulate the most filth, especially in the winter.

I wound up mixing in the bottle...(approximately)
10.9oz filtered water
5oz of Chemical Guys Citrus Wash and Gloss
1oz of Optimum No Rinse

It came out to a pretty basic green color with some decent clinging ability as you would normally find in a liquid/gel mixture. I sprayed it on the size of the sink and it slid down pretty slowly, leaving a nice slime trail behind it that I was looking for. My plan for this will be to spray the mixture a couple inches above the mass of the filth so it leaves a nice coverage all the way down and loosen up the grime. I can always spray more above the mixture as I go to slide down if it didn't reach the bottom.


Sooner or later I'll do a little before and after test using the mixture, which I'll be calling Diluted Optimum Chemical Guys Citrus No Rinse Wash and Gloss (I'm up for new name suggestions). Hopefully it would be a nice alternative to a more expensive pre wash such as P21S Total Auto Wash.

At my size bottle, I used approximately 5oz CWG costing ~ $0.75 and 1oz ONR costing ~$0.31. In total ,and if you really just feel like throwing $0.25 in for distilled water, the total cost of the product comes to... $1.31 per 16.9oz of product, equating to about $0.08 per oz of product after all dilution. Noticing that they both have citrus cleaning agents...

Now I've never used TAW so I'm probably going to do a photo test with my concoction to check it's cleaning ability and then you guys can be the judge. Has anyone tried to replace TAW with a less expensive alternative? Has anyone used degreaser or APC in their blend? Citrust Wash and Clear could also be used as an alternative to CWG. Please feel free to give constructive criticism on anything (dilutions,products,mathematics). At this price you could even potentially double the amount of product in the mix (making it stick better and stronger) and still make out like a bandit.

Pete, I'm glad to announce that I found an audio shop that randomly carries most of the Surf City Garage line. I picked up Road Trip Grime Destroyer, Pacific Blue Wash and Wax, and Beyond Steel Wheel Cleaner. I used them and I like them all a lot. Obviously I need to work with them more to make an accurate opinion.

I saw your reviews on db. I'll probably buy some of the wheel cleaner! YOu know I already have the Beyond Black Tire Pro.

Just got my Makita 9227! just applied a fresh coat of wax yesterday though, so I'll hold out on trying it out for a couple weeks. I'm diggin this new wax I got. Guru Wax. Looks-wise, it's a real winner. real sharp reflections. I can't speak for durability yet, though.

Oh, and FYI, ONR gallons for 29.99! at www.detailedimage.com

Oh, and what pads/backing plate are you using? Did you drop the cash on a 3m bp and some 3m UK pads? Or are you using the standard 6.5" hook and loop that came with it, with 6.5" lake country pads?

I saw you said you used one 6.5" PFW. Just wondering if you've used anything else yet.

pektel said:
Oh, and what pads/backing plate are you using? Did you drop the cash on a 3m bp and some 3m UK pads? Or are you using the standard 6.5" hook and loop that came with it, with 6.5" lake country pads?

I saw you said you used one 6.5" PFW. Just wondering if you've used anything else yet.
Click to expand...

I just have the regular backing plate right now, seems to work fine but the smaller 5.5 pads just won't work on it obviously. I wanna try those UK product but they are expensive, at least the backing plate is.

I was thinking about buying one from Carlos for 45 bucks. I wonder if his prices are Canadian dollars, since that's where he's from. I should ask him, because if so, I think I found my next purchase!

pektel said:
I was thinking about buying one from Carlos for 45 bucks. I wonder if his prices are Canadian dollars, since that's where he's from. I should ask him, because if so, I think I found my next purchase!
Click to expand...

Yea yea you and your friggin free 9227. Your like Kramer, you just fall ass backwards into free stuff. I think one of the main buying points for those backing plates is that the foam is a safety for spoilers and all that on slip up. Seriously though, with a wool pad and HGP I went over my hood for like 30 minutes and I'm pressed to find a swirl. I think the LS has relatively soft clear. It turned out pretty glossy but I can achieve a lot more if I went over it with a white pad and HGP again.

I wish I fell ass backwards and got free detailing stuff...

Werner, weren't you the one who was raving about Zymol stuff? Which products of theirs do you use? I remember HD Cleanse, and that's it. Which LSP of their's do you use, if any?

I use the Leather cleaner/conditioner, the cleaner wax, cream wax and some different hand application pads and cloths.

I even use the cleaner wax on my DVD's and CD's the kids get.

FYI, the cleaner wax (the blue bottle you can buy at Walmart and Target) is made by Turtle Wax.

maybe I should put together a little "sample" kit for you...

Really? Can you provide info? Thats pretty disappointing cause I really dont like turtle wax at all!


EDIT: Oh its Manufactured by Turtle wax but its a Zymol product huh?

Whats that supposed to mean:lol:


I still love the stuff! I am going with others this spring that have been mentioned before though.

I still only got to using it once.


I found this discussion while doing a search for the Zymol deal. I mentioned this forum before and I still have to say these people are NUTS!:lol:
http://www.meguiarsonline.com/forums/showthread.php?t=6033
The last post really made me laugh!

Im really into this now if you cant tell!

Now from what I gather its just distributed through Turtle Wax so the Zymol name can be found at low costs in stores like Target and Wal-Mart.

I never did the research on it, but it looks like plenty of others have! Good info.

One Z product I'd really like to try is their Field Glaze. I hear it's excellent.

Thanks. I found more and it is kind of a draw but the ones that say it is a Turtle Wax product mostly disapprove of it anyway. ( Biased )


No matter what it is designed and engineered by the people at Zymol so it in my eyes is Zymol. For the products that sit along side it and have a greater price tag it blows them out of the water no matter what those freaks on the Meguires forum say.

I got my bottle a while ago at Target with a yellow price cut tag on it. I dont remember what I payed anymore but it was dirt cheap!

Kyle, here's some pictures of that old DG111 bottle that I got at Carquest. I was in there asking if they had a new bottle of it, since the only one on the shelf was this ancient one. So they ordered a new one to put on the shelf, and just gave me this one for free. Obviously they weren't losing anything, as it was already marked all the way down to 1.99. I most likely will just empty the bottle, and use it for polish or something, but thought it was kinda cool to have the old bottle/packaging 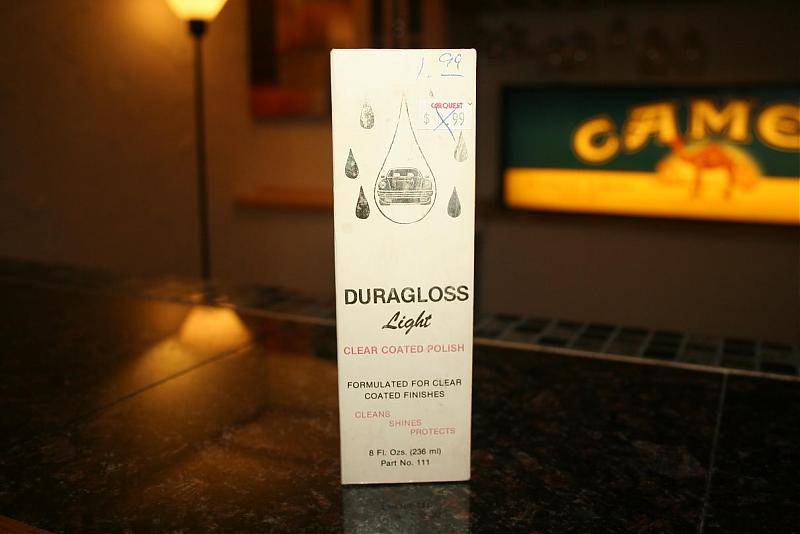 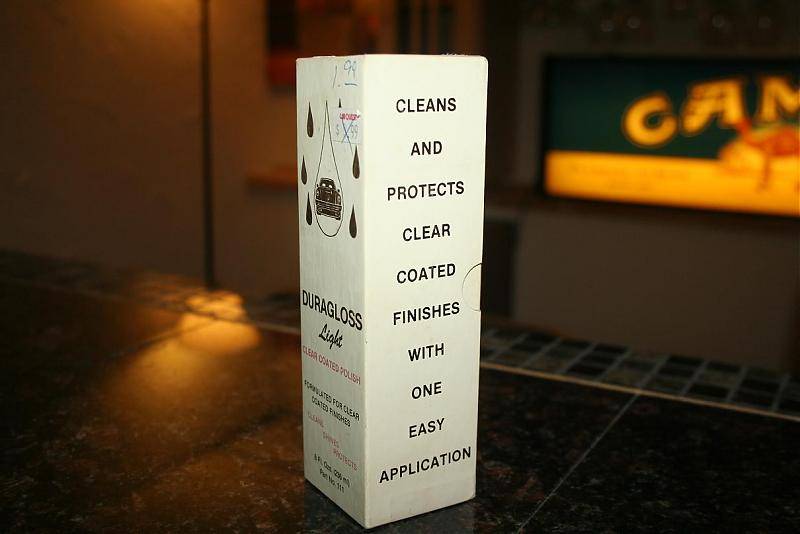 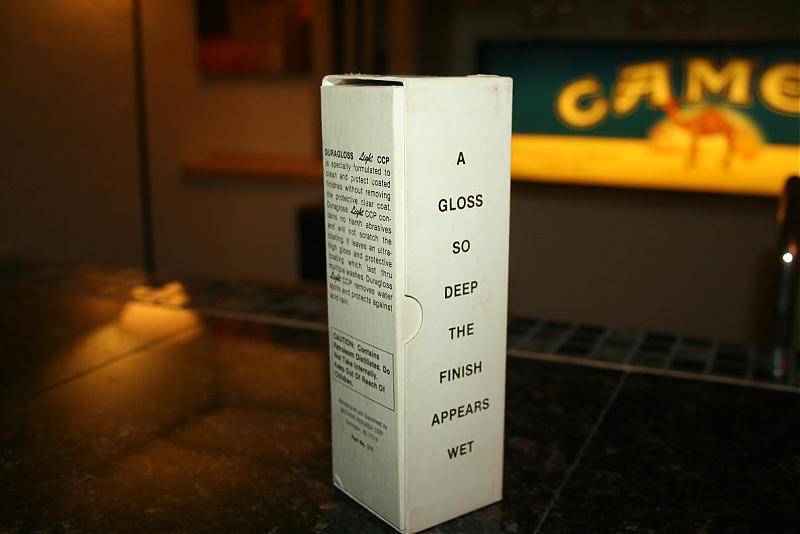 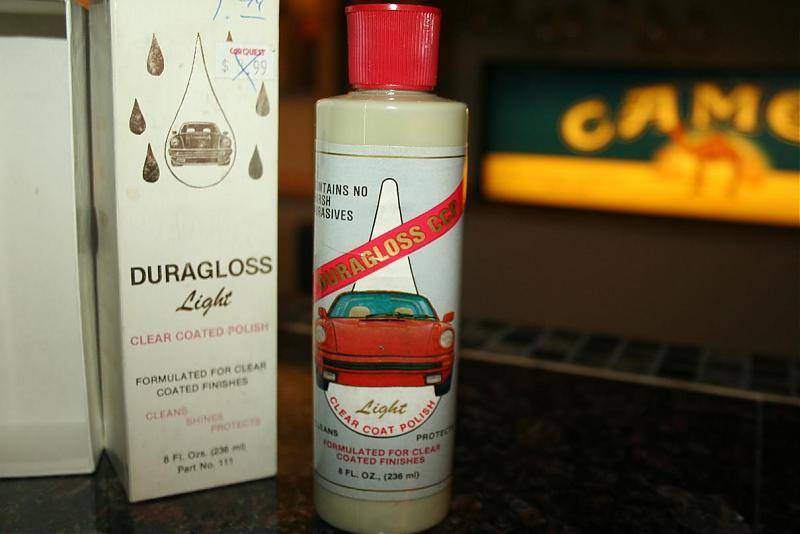 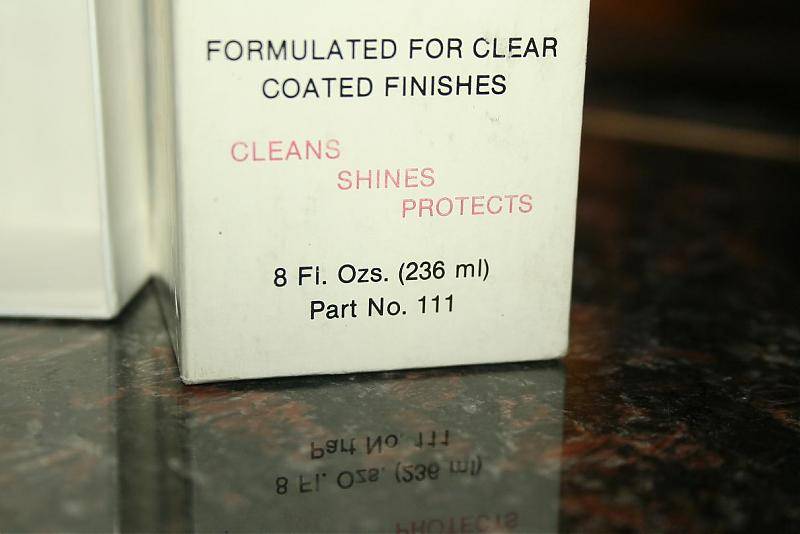 Haha that is old as hell. I'd just save it as a decoration piece. Try and auction it off at DB.

Just got off the phone with DG. The bottle is from one of their first production runs of DG 111. The tip for the guy on the phone was the "Light" in "Duragloss Light" on the box. Also, because it's a 2 piece box, dates it about 20 years old

He told me it's a collector's item! He has one in their conference room on display, kind of a "progression from where they started to where they are now" display.

Oh, and even though I told I didn't pay anything for this one, he is still sending me a new bottle of 111.

You're right, Kyle. For some reason, I do fall ass backwards into detailing stuff!

That's actually pretty damn cool. How the hell do you have something in stock for 20 years? You should get that thing like encased or framed or something, I'm sure your gf wouldn't break up with you...:shifty: Haha nah but seriously, if you put it on display with the box and the bottle seperate itd be pretty cool looking. Sounds like a winter project to me.
You must log in or register to reply here.
Share:
Facebook Reddit Pinterest Tumblr WhatsApp Email Share Link