Biden is starting to disgust me now.

A few days late on this, because I wasn't paying attention... but it now seems that he did an EO that will now pretty much allow co-ed locker rooms based on gender identity.

This is wrong on so many levels! Is he so blind... that he can't see that this could lead to sexual assault.

Biden will "burn" for this one day when he has to "give an account" for the things he has done.
Last edited: Feb 5, 2021

Next thing Biden will do... is censorship of churches... for hate speech.

This same thing is happening in this country too:

A ‘Masculinity Crisis’? China Says the Boys Are Not All Right

If you wanna skip most of this... go to minute 19 and watch to the end. What he says is very true.

Biden is definitely NOT the savior of this country! Neither is the left!

Bad times are coming if the direction/path of this country doesn't change course soon.

04_Sport_LS said:
What a double standard. The "Left" has been "programming" people for at least the last decade.

And they have pretty much completely dominated the teaching in public schools and nearly all universities. We let it happen, and now there are generations that are indoctrinated in their views.

The Dangers of the Equality Act

04_Sport_LS said:
The Dangers of the Equality Act
Click to expand...

And very wrong and twisted.

Been waiting for you to crawl out from under your rock.

Obama had no legacy... unless you include Ferguson, the Hezbolah cocaine deal, and operation Fast and Furious, (arming the Mexican cartel with american weapons).

Trudeau isn't out of the woods yet either.

Remember Wrm... glass houses and throwing stones just makes you look like an idiot. Go back up North and enjoy your Socialust country.

“Socialism is a philosophy of failure, the creed of ignorance, and the gospel of envy, its inherent virtue is the equal sharing of misery.” (Winston Churchill)

So I recently stopped by a neighbors house down the road to check up on them... because I hadn't seen much activity there.

Turns out the both got Covid near the end of January... and were both in the hospital together.

The husbands lungs still sound a little rough and congested when he talks. His wife sounds like she is better than he is... but is on an oxygen concentrator due to diminished lung capacity.

I talked to them for about 5 hours. During that time the wife talked about her youngest daughter, (and son in law). She is a micro biologist... and they live over in one of the E.U. countries.

The daughter was warning her mom about potential blood clots caused by Covid. Now on the recent news... it has come out that the Astrazeneca vaccine, (only administered in Europe) is causing blood clots in some people who have gotten that particular shot.

The neighbors wife then started talking about the living conditions in Europe... that her daughter and son in law were dealing with.

They pay $1800 a month for a very tiny mold infested apartment... and everything is prohibitively expensive.

Obviously... as a micro biologist... the daughter makes good money... but due to all the taxes they pay... they are just getting by.

Yup... Socialisim is such a wonderful thing.

I guess the news was saying today... that "Flipper" wants to put the border wall back up.

Does that make Biden a racist... like Trump was accused of being.

Lyin Biden is at it again...

How is this going to affect the security of Israel?

Even the U.N. CFR doesn't think it's wise for the U.S. to pull out of Afghanistan.

Biden’s 9/11 Withdrawal From Afghanistan: What to Know

Now we also have the re-invasion of Ukraine by Russia. Think that might be to permanently bury/erase Hunter Biden's wrongdoings???

The Founders Didn’t Want DC As A State. Neither Does This DC Resident

It was NEVER meant to be a state. It was intended to be a neutral Federal territory.

This is just a power grab to get more liberal electoral votes to swing the balance of power. Regardless of if the Dems succeed or not... Peurto Rico and Guam will be the next target for a Liberal power grab.

Puerto Ricans voted for statehood; now they are waiting on Congress | Column

So... The Astrazeneca vaccine was banned in Europe due to the potential of causing blood clots.

A few weeks ago... there was a brief news segment on TV... saying that Astrazeneca was in communication with Johnson & Johnson.

Then Johnson & Johnson made the news... with their vaccine now potentially causing blood clots.

Hmm... think Astrazeneca decided to "off" the remainder of their vaccine to J&J... to preserve company profits ???

all these investigations running under barr that are now coming to light under biden.
like child sex trafficker, child sex predator, child pornographer matt gaetz by wriiten confession coming out.
why is this guy still on a judicial committee?
why is he still in office?
no wonder he was the sole no vote on a sex trafficking bill.
keeping himself out of jail.

Odd that the only thing investagators left behind was the dossier on Hunter.

I like him way better than Trump. Lol. Anyone but Trump. 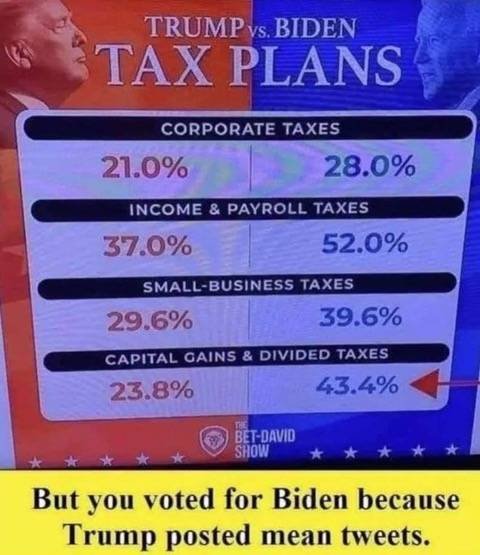 If you live in the U.S. , then you have no clue how Socialism works... but you may find out.

Why??? Partly due to Obama's 35% corporate tax. The corporations bailed by the masses. Those who couldn't , (like the automotive manufacturers... except Ford), got bailouts. Guess who ended up paying for the bailouts?

That's right... we the tax payers. Biden wants to raise minimum wage to $15/hour. While that sounds great... wait until you pay $10 for an (un)happy meal at Mickey D's.

$15/hour may be acceptible for entry level factory work that have no practical experience... but it's not going to work out well for the average "service industry" worker.

There are already statistics being done... and a wage hike to $15/hr is going to cause the loss of 1.4 million jobs.

On top of this... the current admin wants Universal Basic Income, (free money above and beyond any earned income).

This country is already walking a fine line financially. Dumping more money into the economy to falsely boost numbers... is going to cost evryone.

Unemployment was exteremely high. Housing intetest rates went through the roof... which also caused rent to increase... along with durable goods and food.

The increased cost of ANYTHING always gets passed on to the consumer/tax payer... and it will find a "balance" eventually... and passed on to everyone.

The ONLY ones it won't affect... is the wealthy and powerful. Biden's plan is a "pipe dream" heading for failure... and when the U.S. economy fully collapses... we will be forced into a global currency, and join the E.U.

Germany wants out of the E.U. ... pretty much for the same reason Great Britain got out.