So far we have two Mark VIIIs to crowd in with our Mustangs and Turbo Coupe. One, (Old Blue) is our highway cruiser, the other, (Pearl) is a parts car that is too nice to crush. Pearl is too nice to crush, so we had the engine rebuilt and runs great!
Overview Gallery

Old Blue is the first Lincoln that either my wife or I have owned. We purchased it in the middle of June this year.
It is a 1995 Portofino Blue Base model with a Landau top, Ivory leather interior, and Dayton Wire Wheels. It has an Arnott Spring Conversion Kit that lowers the car about 1 1/2". It showed a bit over 114,000 miles the day we bought it.

The previous owner had Flowmaster Mufflers installed on the single exhaust, which I plan to convert to true duals, with at least one X pipe, as soon as we return home in August. 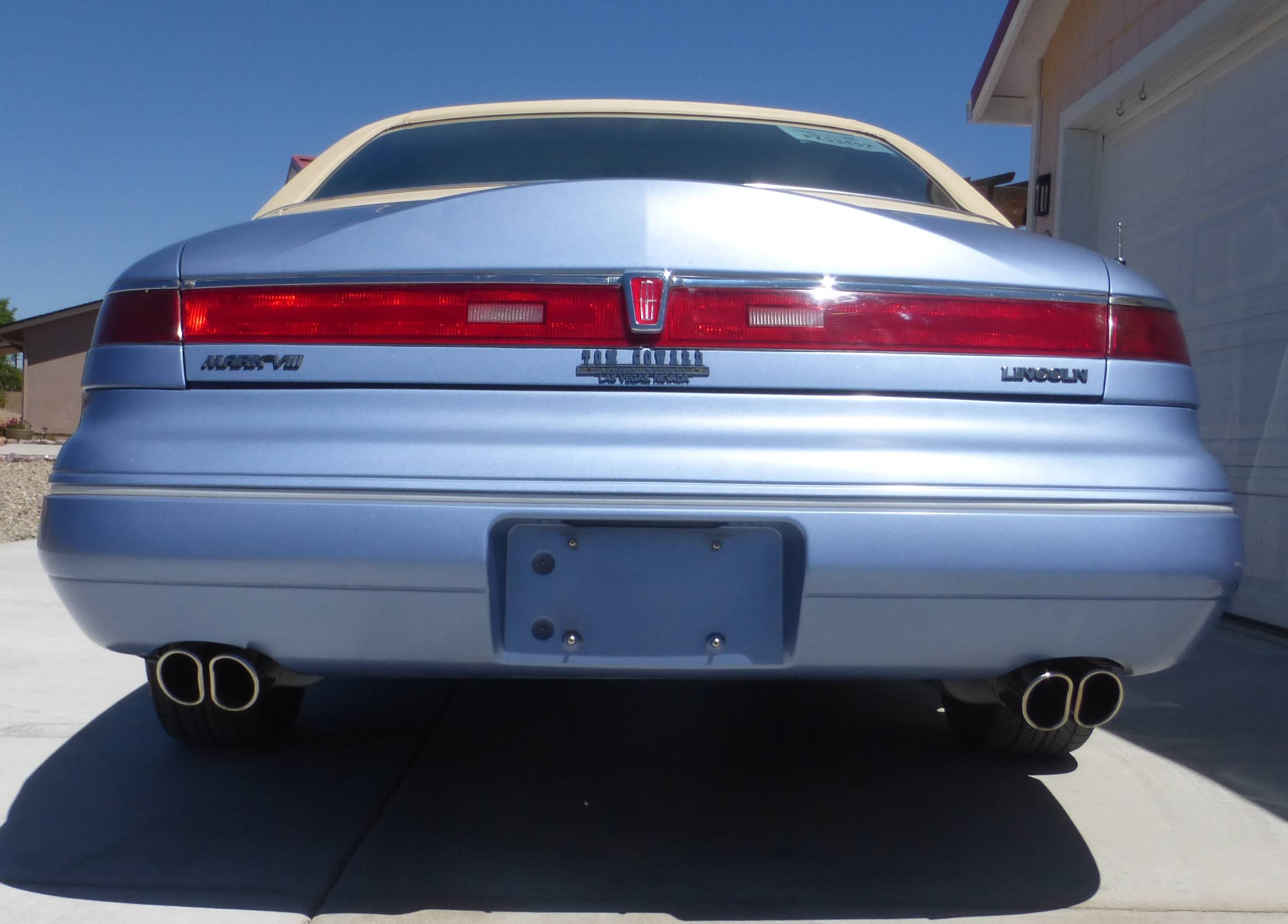 I installed a K & N air filter immediately after purchasing it. We have also changed the oil to Mobil 1 synthetic 10W30 and changed to a Fram ultra oil filter, had the alignment done, a transmission flush, and new Michelin X Tour Tires installed on it.
Last week we drove it 1400+ miles from Arizona to Spokane Washington on our July vacation. 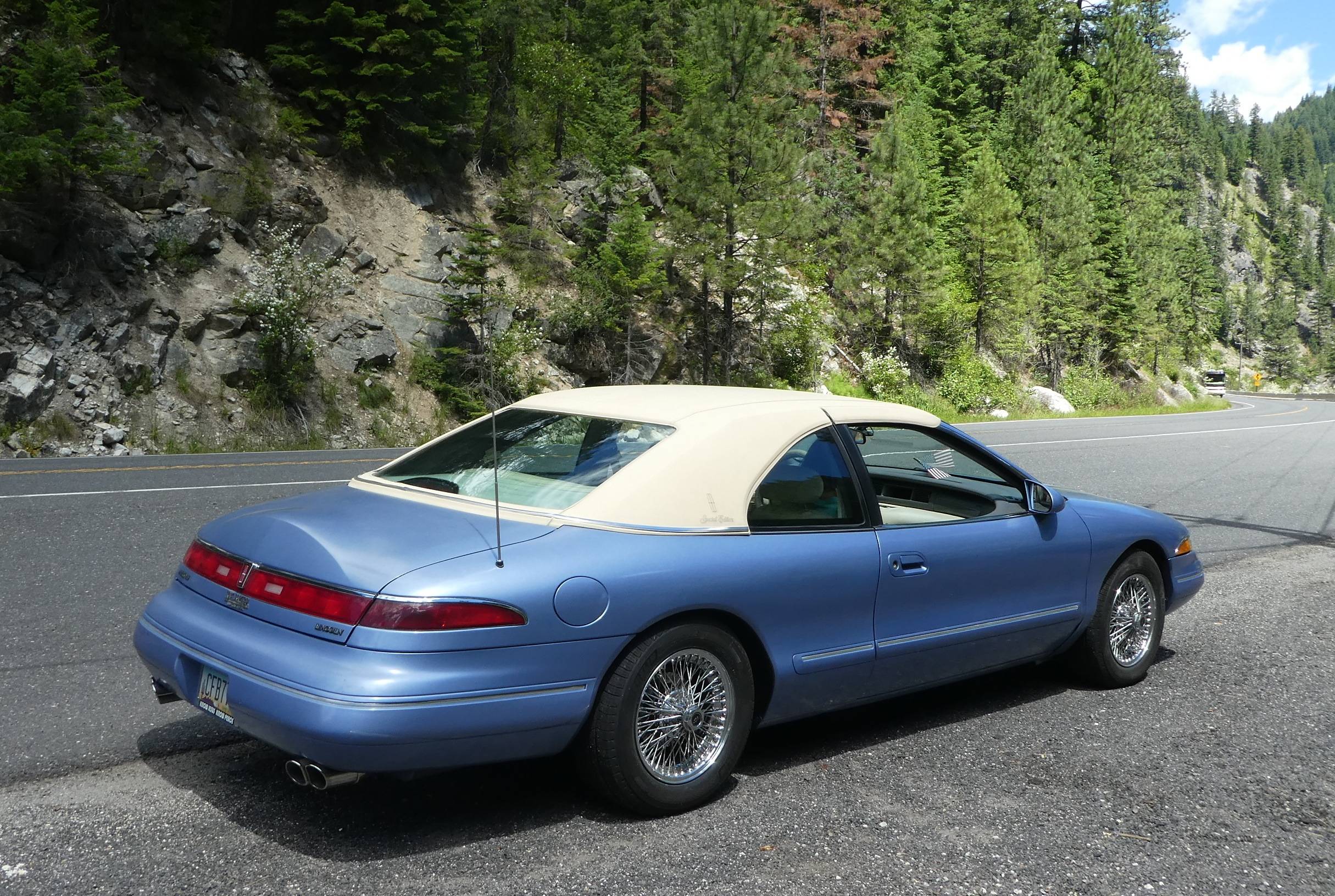 Our parts car is a 1995 LSC in Ivory Pearlescent White with Saddle tan interior. It sports a 90,000 mile seized up engine. We purchased it last week prior to leaving on vacation. It is completely original stock except for the American Racing Maverick 5 spoke Anthracite wheels.
I am not sure what my future plans for this car are, but I know it is far too nice to strip and crush. 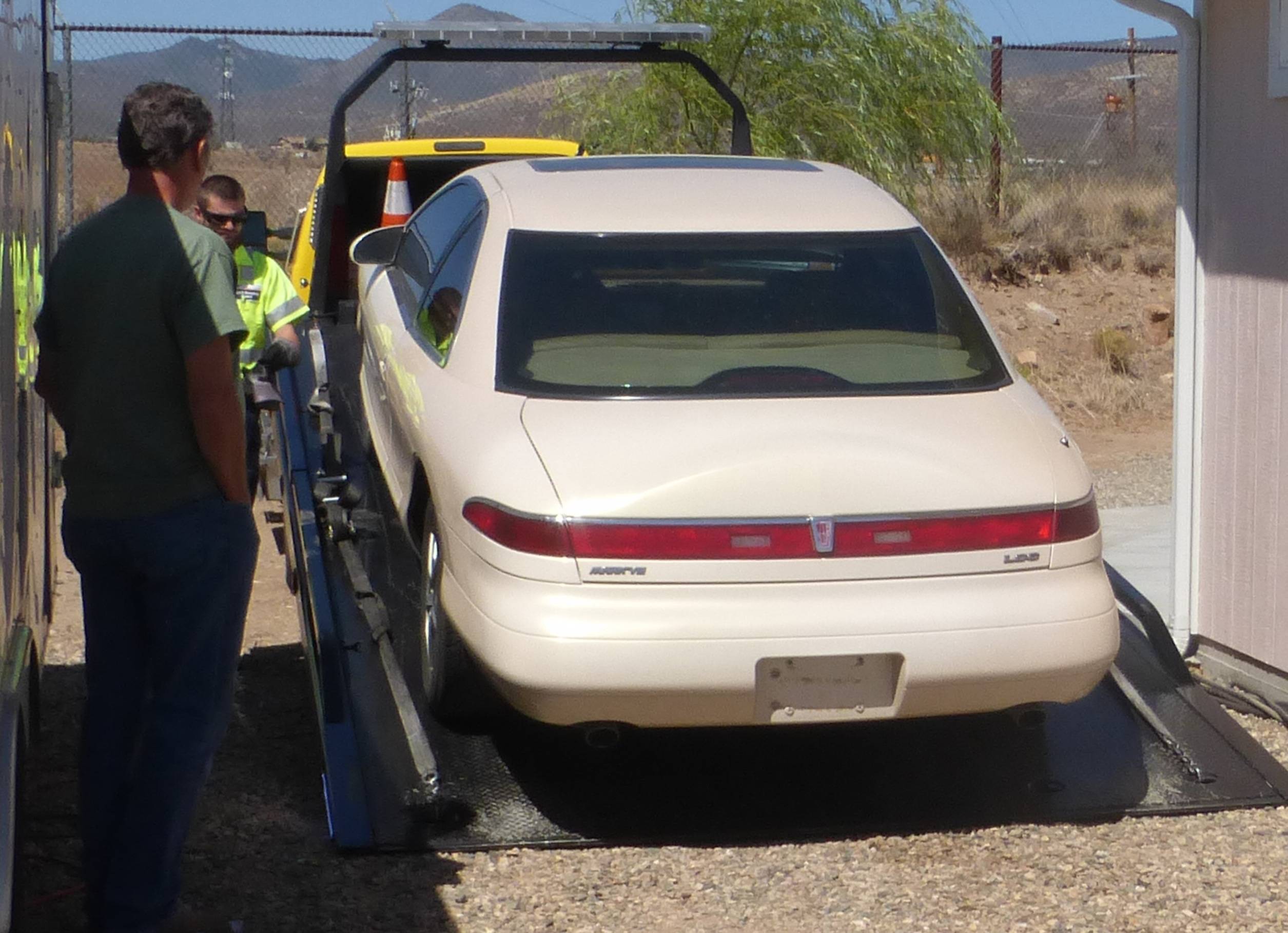 12/24/18 Update: Ivory Pearl has a newly rebuilt engine and has become my driver and 1st LSC.
Ron 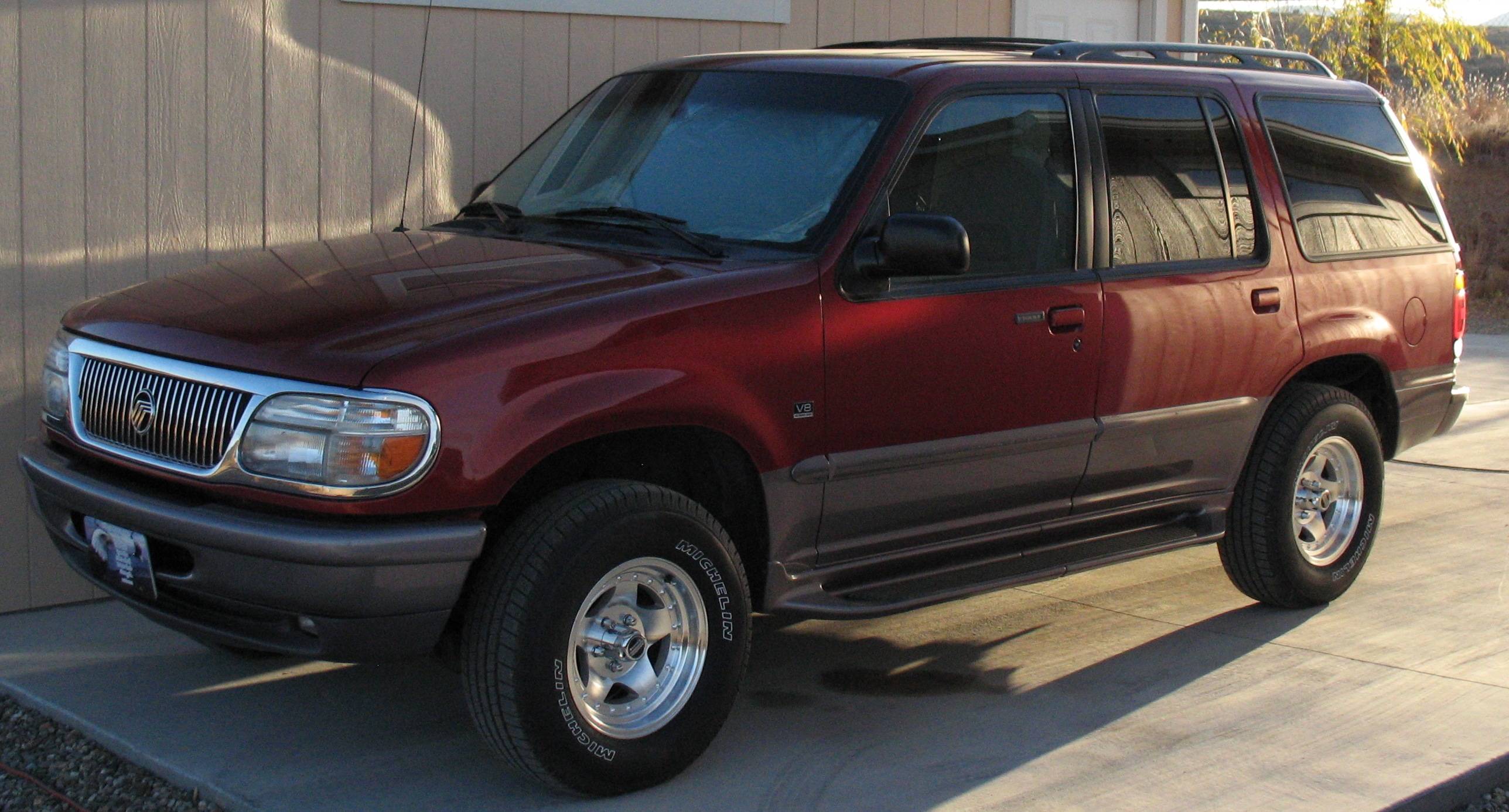 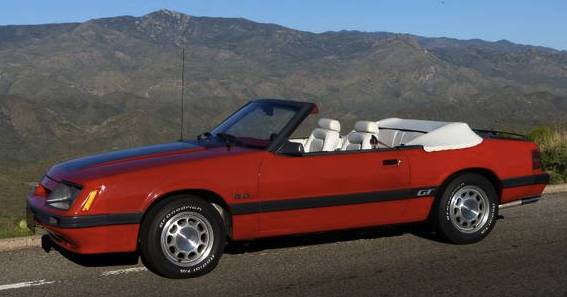 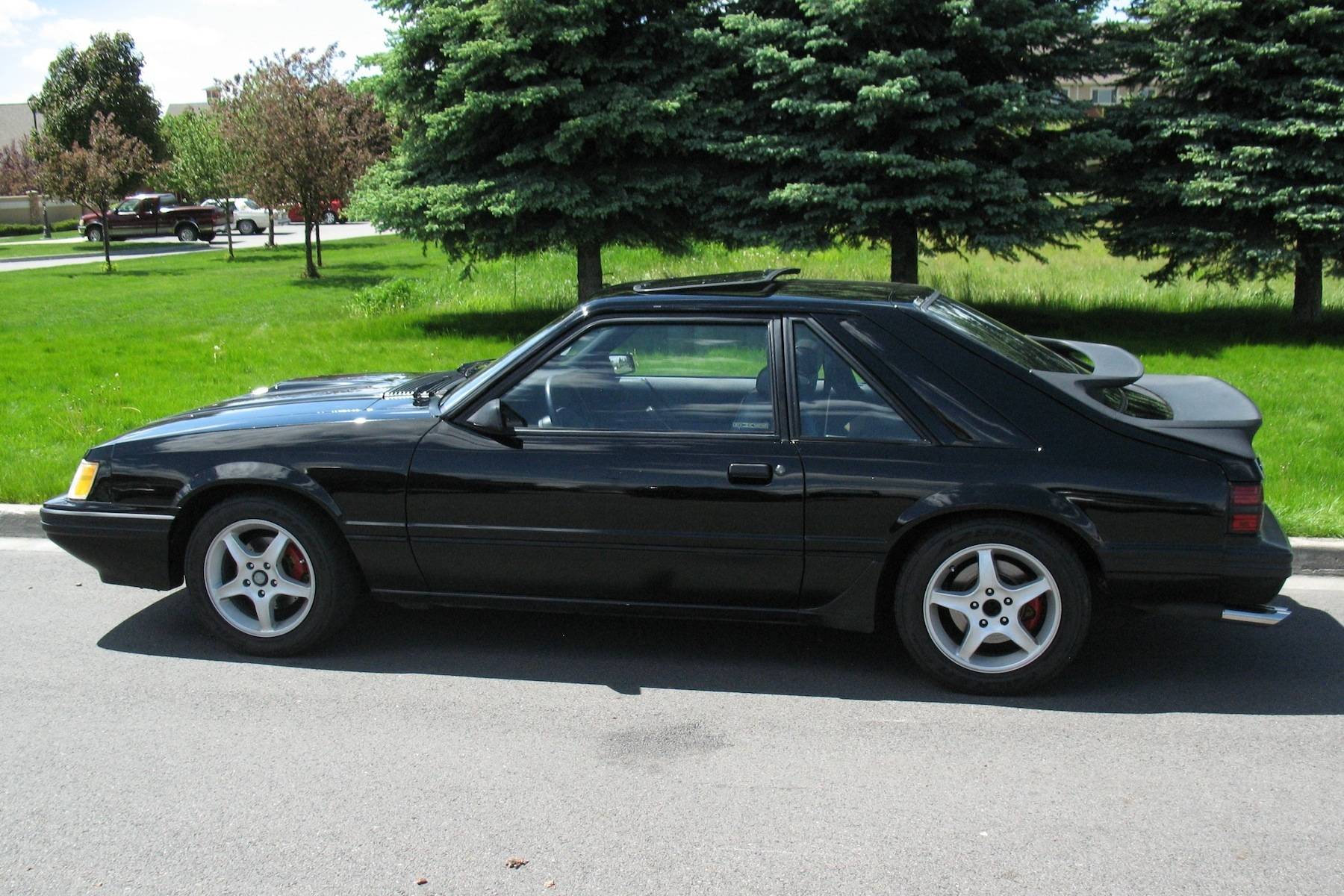 I live in the North East it rots cars out from the salt. We have to store cars for the winter. Nice to see clean vintage cars in a nice dry climate.
Nice group of toys. You wont be bored and always have something to tinker with!

germansheperd said:
Nice group of toys. You wont be bored and always have something to tinker with!
Click to expand...

Thank you for the kind words germanshepherd.
You are correct about not being bored, I do always have at least one of them that is begging for attention.
I will probably be selling either the Turbo Coupe or the convertible before too long, because I lack enough garage space for all.
Ron

I live in the North East it rots cars out from the salt. We have to store cars for the winter. Nice to see clean vintage cars in a nice dry climate.
Click to expand...

Thanks for the compliment svets96. We are kind of Fox Body nuts I guess. We have owned a total of 14 various Foxes over the years.
This is also our 4th Mountaineer......we tend to drive them into the ground. The last one had 225,000 miles on it before we sold it.

I grew up in Iowa (The Rust Belt), so I know what you mean about the horrible "winter salt plague".
In Arizona, it's nice, being able to enjoy driving which ever one we choose, any time of year.
Ron & Sue
Our 88 Turbo Coupe and our 86 GT convertible now have new homes, as we attempt to trim down on the amount of vehicles we own.
Our 95 Pearl LSC was towed to Phx for an engine rebuild last Thursday, if all goes well there, it will not be used as a parts car, but as my personal Mark, & Sue gets Ol' Blue as her personal driver.
Ron
Just a good news update to our situation. Black Bird, the 88 Tbird turbo coupe and White Lightning, the 86 Mustang GT have new homes, and our two garages have been somewhat cleaned out. That means that we are able to squeeze all the cars into garages except Ruby & our old grocery getter, Accord wagon.

Ron
Greetings to all of you.
I haven't been on any forums in quite some time, but this morning I received a birthday greetings from this site, so here I am.
Both I and my 95LSC, Ivory, have birthdays in July; I turned 78 & the LSC turned 25 this month!
We have been doing more trimming down in the past couple of months. We sold our motorhome, our SVO, and Now Old Blue is gone also.
That leaves us with only three motorized vehicles: Ivory, a 95LSC, Ruby, a 97 Mountaineer, and one ratty old 97 Accord wagon grocery getter.
In these uncertain times we felt it best to start minimizing as much as possible, including vehicles that we seldom drive.
Ron & Sue
PS have a great summer......masks and all!!