I've read through many threads on this in the search, but not sure that I found the answer for mine.

Washer fluid just stopped coming out one day. Replaced the motor with a new Motorcraft one. (no low fluid warning ever came on, fluid was not low)

It shot some fluid out once then stopped. After several more tries, shot two streams and then stopped again. (with new motor)

He had the old motor hooked up to something and it worked, I could hear it running. (not on the car)

When we tried the new one that was on the car again and got down by the motor, could not hear the new motor running.

Hooked up a small hose to the line that runs to the 3 nozzles, used a air hose and fluid came shooting out of those, so clogged up nozzles is not the issue.

Wondered if the new motor was bad, but it didn't work with the old motor (at all) either, and we now know the old one works after testing it.

Read on a previous post from Joe that the relay is in the windshield wiper "smart" motor. Can that be checked somehow?

A couple posts said to check the fuse, but didn't say where one is, if it actually does have a fuse. We looked in the owners manual and could not find one if it's there. We moved some of the relays in the box under the hood that were the same around to see if that made a difference, it didn't.

He looked online and said the on/off switch (he called it something else, forget what he said) was in the turn signal knob, can that be tested, if so how?

If anyone has any thoughts/ideas they would be much appreciated. Thanks in advance.

Joegr - on mine (2000 V6 MT) the low fluid level light stopped working awhile ago. Since then the washer works but the wipers do not come on when the washer is used. I turn the wipers on manually after having the washer spray on the windshield. So its possible for the washers to work without the wipers.

Yes the wipers works as normal, just no fluid.

pragmatic said:
Joegr - on mine (2000 V6 MT) the low fluid level light stopped working awhile ago. Since then the washer works but the wipers do not come on when the washer is used. I turn the wipers on manually after having the washer spray on the windshield. So its possible for the washers to work without the wipers.
Click to expand...

Two points:
1. His is gen 2, the wipers and washer are controlled very differently on gen 2 than gen 1.
2. My comment was: If the wipers work when you press wash, then the wash button is okay. Saying that it is possible for the washers to work without the wipers does not contradict this. Note also that the wipers are not supposed to sweep when you press wash if low fluid level is triggered.

I wish I could remember completely how I fixed mine on my 04. I do remember removing the electronics board from the wiper motor assembly. I can't remember if I just reflowed some of the solder on it, or if I actually replaced it. I think I just reflowed it.

Joe, I had just found a post of yours from 2013 when I searched for 'wiper motor assembly.' This photo was in your thread. I went and found that and moved it slightly around a bit, could have sworn I heard a little noise. Then I had someone try to turn the washer on as I moved that connection around again and it worked! You are the man Joe. Thanks again! Do you think it's ok now, or probably going to flair up again and what exactly would you think would need to be done/replaced at that point? 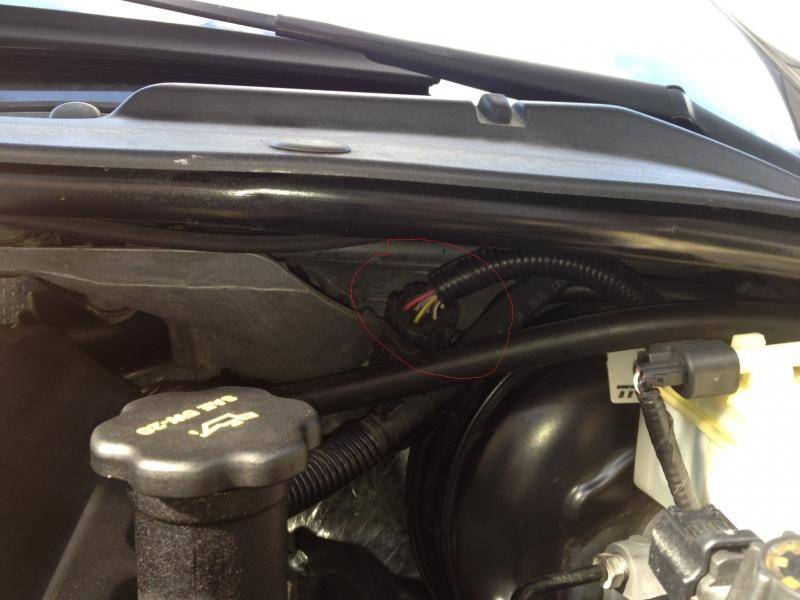 I recall moving it a bit a few times to get it to work for a while. Finally (months or years), it stopped and wiggling no longer brought it back. That's when I took the motor apart. It's been good since then.

So the part that this harness plugs into is the wiper motor? If it fails to work again at some point, then would the harness or the wiper motor most likely be the problem? I guess that would depend on what is or isn't actually happening at that point. If the same issue of no fluid, then which would you think?

I was pretty sure it would be the harness, but I couldn't find any problem with it in my case. May have been the soldering of the connector to the electronics board in the wiper motor.

Since the connector wires are about 1/2 inch from the degas tank, maybe when all of the coolant parts were getting replaced something accidentally happened to it then. Hopefully it will be ok now. *fingers crossed* Thanks again Joe.
G

hehe my driver side is intermittent. Think I am gonna have to investigate this too.

grizzlyls said:
hehe my driver side is intermittent. Think I am gonna have to investigate this too.
Click to expand...