I am too old to do repairs any more, but my son isn't. I was getting a PCV valve code on my LS. Of course, in order to replace the PCV valve on the V-6 you need to remove the intake manifold and everything that goes with it. My son removed the intake manifold, and while it was off I had him replace the valve cover gaskets and all the spark plugs and coils. It turns out it probably wasn't the PCV because the formed hose for it was crushed, but of course you would never discover that until the manifold was off. Everything was re-assembled and now my cruise control doesn't function. I took it on the freeway on Saturday, pushed the steering column switch ON, and when I got to cruising speed, I pushed the SET button. The green dashboard light came on, but the speed wouldn't lock. As soon as I let off on the gas pedal the car started slowing down. I found this annoying, but I bet the vehicle behind me found it more so. Well, my son has no idea what he disconnected or failed to reconnect so I was hoping someone here might have some things he should be checking, round up the usual suspects so to speak. The first thing I thought of was maybe a fuse, but would the dash light still come on if I had a blown fuse? I have pretty much ruled out the steering column innards because it was never accessed. All ideas cheerfully accepted.

There are two cables that attach to the throttle, one from the gas pedal, and the other from the cruise control servo. Maybe he didn't reconnect that one?
T

I am now getting an EGR code, so he will be replacing the EGR valve on Friday. We shall find out on Friday when he inspects his handiwork if he forgot to connect the servo cable. EGR replacement is something I could still do myself, but I have no tools any more. Well, I have an electric drill, screwdrivers, assorted pliers and a hammer, but that's it. All of my mechanics tools were stolen. Long story.

He loves working on cars and he has offered to rebuild my entire suspension system, but I am thinking the dealer might be safer.

Tomas said:
He loves working on cars and he has offered to rebuild my entire suspension system, but I am thinking the dealer might be safer.
Click to expand...

Depending on your son's experience and skill level, it might be better to have someone else do it. If the shocks need replacing... the coil springs have a lot of stored energy... and can severely injur or kill an inexperienced mechanic.

There are also a lot of "little details" that need to be paid attention to when working on the suspension... depending on what all is going to be replaced.

joegr said:
There are two cables that attach to the throttle, one from the gas pedal, and the other from the cruise control servo. Maybe he didn't reconnect that one?
Click to expand...

Right again, Robin. The Servo cable was not connected.

The EGR valve is replaced, the Code Reader says there are no more error codes, I drove it around a few blocks and the CHECK ENGINE light did not come back on, so now I will do a Basic Drive Cycle once again, and if the light stays off, I will take it to the smog station. I am supposed to have a free retest, but I don't know they will honor it after a year.
Last edited: May 15, 2021
T

Me too. Now I have the body of a fat old goat!

Tomas said:
Me too. Now I have the body of a fat old goat!
Click to expand...

Mine was a 2001 Grand Marquis. It was an oddball... because it was only 1 of a few made... when Ford first started experimenting with the idea of the Marauder.

I put the car on its roof back in 2010. Only part of the roof that wasn't flattened... was over the drivers seat.
T

All right, now I am starting to get urinated off! I let the car sit overnight, started it and let it run, turned on and off the heater, defrosters, and headlights and let it reach normal operating temperature and return to normal idle, just like the instructions say.

Drove it out of the garage and headed through the city streets, headed for the 99¢ store. As I pulled into the parking lot, THE DAMN CHECK ENGINE LIGHT CAME ON AGAIN. This time it gave me a code 1409. According to folklore, code 1409 has to do with the EGR Vacuum Regulator Solenoid. That will be another 40 bucks American, thank you. I cancelled the light and headed back home. When I got back home, the light had not come back on. If you can hear some unexplained screaming when you go outside, it's probably me.

At your car's age, expect stuff to break when you remove it and put it back.

Tomas said:
. If you can hear some unexplained screaming when you go outside
Click to expand...

I've been doing that lately also... for different reasons.

And Joe is right. As plastic ages... it starts falling apart.
M

Check the hose that connects to the PCV tubing at the end of the intake where the hose transitions from about 14mm in steel to a 14mm rubber transition to 8mm for the plastic tube that runs to the throttle body, where it turns it back to 14mm by using that same adapter at the other end of the hose. Mine was cracked in a stealth way right in the middle of that 14 to 8 mm rubber fitting. Unfortunately, you may not be able to see it with the cowling and brace installed. 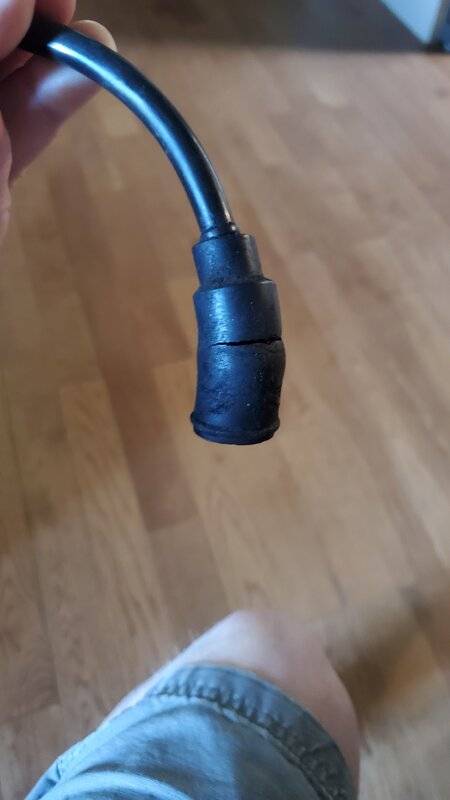