My 2004 V8 has 269,000 miles on it and is running great after a rebuilt transmission and a number of various repairs and upgrades, e.g. cooling system, suspension, etc. I need to do the rear UCA's but will start a separate thread for that.

I have a steady oil leak that is coming from the front cover and/or front seal that appears to be getting worse...several drops every time I drive it end up on the driveway. So, I have been studying how to do this job. Joegr suggested that while I have the front cover off, it might be worth it to replace the timing chains, guides and tensioners. There are quite a few videos on timing chain upgrades, predominantly, if not exclusively on the Gen 1 LS and early 2000s Jags.

I have begun to generate a list of parts and have a few questions. Would a 2004 LS (AJ35) have the "silent timing chains" or the roller type? I can't seem to source the replacement bolts for the camshaft sprocket. The manual says to replace with new. Maybe just loctite them in?

I have looked at several different vendors for parts, some have full kits and others, e.g. Fordpartsgiant only has one primary and one secondary timing chain. I'm am a bit nervous going with aftermarket chains and tensioners.

I'm sure I will have more questions and/or am missing something but this is a start.
A

slap that ebay guide and tensioner set on it call it a day. if you want i can give you the link to the genuine parts
R

slap that ebay guide and tensioner set on it call it a day. if you want i can give you the link to the genuine parts
Click to expand...

Thanks, which "ebay guide and tensioner" do you mean, this one? 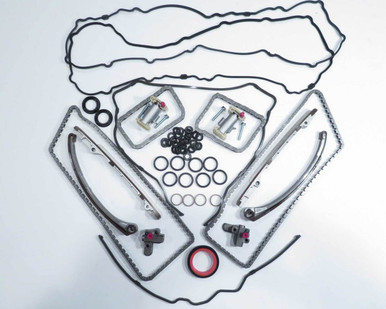 If you have a link to the genuine parts, that would be great.
A

rgorke said:
Thanks, which "ebay guide and tensioner" do you mean, this one?

If you have a link to the genuine parts, that would be great.
Click to expand...

put jaguar v8 timing chain into ebay and find the cheapest kit. then find the seals and you’ll have all the cheap parts they throw these kits together with