2006 Lincoln Ls rear deck speakers needs replacing , how to get the speakers out ?

You have to drop the back seats down... pull the extra side pieces of seat off the trunk bracing... then remove the side rear pillar post trim to get the deck carpet out.

The speakers remove from the top of the deck.

patwesley said:
2006 Lincoln Ls rear deck speakers needs replacing , how to get the speakers out ?
Click to expand...

Those are actually subs, and I am sure that surround has rotted out on yours by now.

You can however replace them with regular new 6x9's. You just wont get any use out of the mids or highs.

04_Sport_LS said:
You can however replace them with regular new 6x9's. You just wont get any use out of the mids or highs.
Click to expand...

Note that they need to be 2 ohm impedance to work correctly with the factory amp.
U

04_Sport_LS said:
You have to drop the back seats down... pull the extra side pieces of seat off the trunk bracing... then remove the side rear pillar post trim to get the deck carpet out.

The speakers remove from the top of the deck.
Click to expand...

Yeaaa big PITA; I just did this a couple weeks ago; Got lucky and found a set while I was at the junkyard that still were in great condition for $5 each; They can be had new from Ford for ~$40ish each also. Considering it’s hard to find a reasonably priced direct fit sub at 2-ohms, I was glad I got lucky that day. They really do sound rather good for a stock system of it’s age.

IMO I wouldn’t recommend using a full range speaker to replace a sub; it’ll work, as the amp does the low-pass, but, meh, it was a sub to begin with, and better to spend the money on a component made specifically for low frequency only rather than not using half of a 2-way.

Removal: There is a trick to getting the bolsters out (disclosure, I realized this after the last time I took them out, haven’t verified it’s easy to get at the levers, but I’m fairly certain this is the correct method to remove them) there is a level for lack of a better word, that will release the whole clip from the bolster, clip remaining mounted to the the trunk frame. It’s far easier then getting them out by releasing the clip from the frame, from inside the trunk, which runs the risk of breaking a clip. Plus it makes re-installing and aligned the bolster with the clip much smoother

I also grabbed the grilles from one with the THX system, and cut holes in the back shelf for them, so that if I ever have to pull them out again it’s not such an ordeal. It’s super easy if you’re already taking the speakers out. I cut the first hole before I noticed a plastic bezel on the grilles just cones right out, and makes a perfect template for the cuts. Shine a light from inside the trunk to see where to mark it on the top.

Additional somewhat related (For context my 2005 LS came with the cdx6/soundmark 12 speaker system that I replaced with a raspberry pi, touchscreen, a DSP and an amp):
I replaced all my door speakers with THX speakers from another LS at the boneyard, also $5 each. I swear I remembered reading other posts stating the THX and non-THX door speakers were all the same — but they are not. I didn’t weight them, but the THX are probably 1.5x the weight, and have a slightly taller non-chamfered housing, but still fit just fine. The THX speakers have a good bit more of a punch, probably on account of the bigger magnet - the actual cones/tweeter appear very similar, if not identical, though I did not pull them apart to inspect.

Attached: Comparison of THX and Original Soundmark/MACH door speakers. I replaced the cruddy foam seal with rubber stick-on weatherstripping I had lying about. The white on top of the MACH speaker is replacement foam stick-on insulation I had lying around last time I pulled the speaker out. 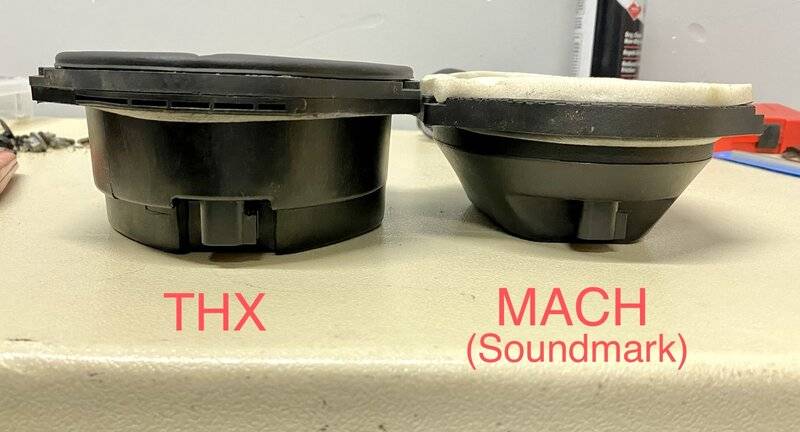 I’ll edit to add a picture of the cutouts/grilles if I think of it, but you can guess what it looks like. It looks slightly out of place as the interior is camel tan and the grilles are black, but it works, and can always be painted.
Last edited: Dec 4, 2021
V

I just replaced the foam surrounds in my THX speakers. Worked out well.