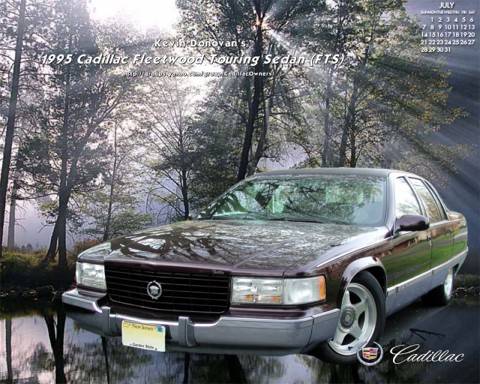 This is my baby! It's a project that took years to even start. I used to do a lot of work with Cadillac and always tried to get them to build a FTS version of the Fleetwood. Alas, they always said there would be no market for it. Boy were they wrong! Based on the attention this car recieves both at shows and on the street, I'd say Cadillac missed out again on a hit. Oh well, I'll just have to live with having the only one!
It drives like a sports sedan, rides like a Cadillac, and RUNS like a Z-28!!!
I'll be posting my time slips as soon as I dig them up. I posted them online a while ago.

The other car is a '86 MK VII LSC that I kind of "customized" a little. I know it looks TOTALLY stock, that is until you realize that Lincoln didn't make a "Special Edition" LSC in '86. I reproduced the later model car down to the last detail. It was costly but worth it in the end. Unfortunately, the car was totalled a couple years after I got it totally done. Normally, I would've junked it but my wife insisted that I rebuild it. It's taken a while but SHE'S BACK! as you can see.

Last but not least is my wife's Aviator. She loves it to death, I like it too. It's actually a real nice vehicle to drive. Handles nice, rides nice, and actually has some power thanks to a 302hp 4.6 DOHC engine from the Mustang.
Share:
Facebook Reddit Pinterest Tumblr WhatsApp Email Share Link

i love the caddy !!!!!
Nice! Check out my Eldo
Best of both world,s...
i have an aviator and have the same issue with seat moving on th drivers side. lincoln wont fix it, we should band together and throw a fit, it drives me crazy when i drive it
Is there any one company that makes custom and performance parts just for Cadillacs? After wheels and some intake/exhaust step-up's, there is very little in my area. SW burbs of Chicago. Any help! greatly appreciated
very nice caddy i like the color and rims check my fleetwood out
hey you have to tell me how to get my car to run like a z28 i have the 350 lt1 v-8 and where did you get those cool rims thanks rich